The months of waiting had added more fuel to the fire, and after all of the circumstances they went through to reach this second battle with IBO, WBA, WBC middleweight champion Gennady Golovkin, Mexican superstar Canelo Alvarez will be more intense when they collide.

The rematch is set for September 15th at the T-Mobile Arena in Las Vegas.

In their first contest, which took place at the same Las Vegas venue, the bout ended in a controversial twelve round split draw. 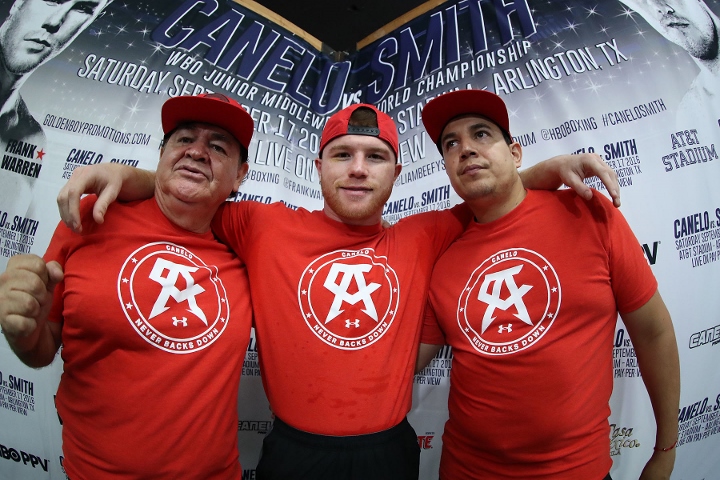 Canelo's trainer, Eddy Reynoso, will work with his fighter in Jalisco until July 9, because a day later they hope to move the entire training camp to California.

They were scheduled to fight back on May 5th, but the event was canceled after Canelo tested positive for the banned substance clenbuterol - and then Canelo was hit with a six month suspension by the Nevada State Athletic Commission.

"We are calm because we already have a fight," said Reynoso to ESPN Deportes.

"It's always uncomfortable to be without an opponent, we already have a date and that is the most important thing, but now we have an opponent, an opponent that we've been looking for since the start, since May, but for known reasons it was postponed and it became more difficult to negotiate, but the good thing is that it got made.

"It will be a more interesting fight, more intense than the last time, a fight where there will be more punches. There is nothing left to do but prepare as always, do things as best as possible and move it forward. We are doing combat school, boxing school, working mitts, strength work, conditioning, everything is working well, we are going to California on July 10 where we will be working with the same sparring as the last time, two Russians and an Australian. We have been watching fights of yesteryear, the recent fights of Saul, checking for mistakes, things we have done right and wrong."

[QUOTE=boliodogs;18863945]Yesterday you said GGG would wake up from being knocked out by Canelo and ask what round is it. Today you have Canelo boxing his way to an easy win. So which is it? Does Canelo knock GGG out cold…

[QUOTE=Shadoww.702;18863594]Because Canelo has impeccable stamina to circle for 12 rounds right? The “great work on the ropes” was an indication of how well he circles around the ring right? As great as he is (and he is) he gasses out…

Alvacheat isn’t knocking out GGG. He best shot is trying to get a decision. He needs to throw more combinations this time and improve on his stamina. If he tries to be more aggressive and tries to get GGG out…

GGG took Canelo's BEST shot and it didn't even phase him. GGG stunned Canleo at least once and this was with him barely going to the body. GGG works the body more this time. BUT, b/c of the CLEAR cheating…