The first fight of that deal will take place on December 15th, when Canelo moves up to 168-pounds to challenge Rocky Fielding for the WBA "regular" super middleweight title at New York's Madison Square Garden.

Canelo's contract with HBO expired last month. And soon after the network announced their intention to drop boxing by the end of the year. 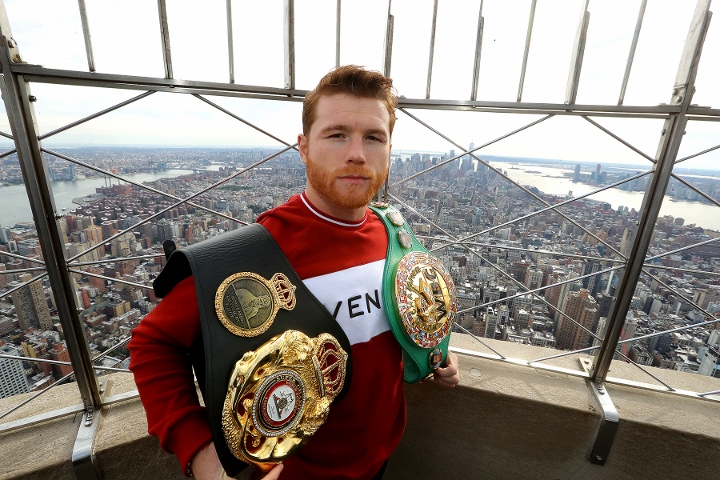 The Los Angeles Times has reported that Canelo's deal with DAZN is a five year pact - with 11 fights under that deal.

And entire package is worth a staggering guarantee of $365 million.

As part of the new deal, Golden Boy is guaranteed 10 shows a year on DAZN (starting in 2019) - which is a huge boost for De La Hoya's company, because they lost their network home when HBO announced their decision to part ways with the sport.

Canelo and Golden Boy will officially announce the deal on Wednesday, during a New York City press conference to promote the Mexican superstar's showdown with Fielding.

The pairing of Canelo and DAZN is a breath of fresh air for his followers - because the app is available for the monthly fee of $9.95.

Canelo, who is only 28-years-old and currently the biggest draw on pay-per-view, was a costly attraction for his legion of loyal fans.

DAZN crashed on the scene a few months ago, when they finalized an eight year content deal, worth $1 billion, with British promoter Eddie Hearn of Matchroom. DAZN also signed a nine-figure content deal with Bellator, which is the UFC's biggest competitor in the United States.

[QUOTE=kafkod;19205504]waa me no like eddie hearn, he a nasty man[/QUOTE] Nope, not the case at all. Just like to state facts, ya know? And I've been one of the biggest advocates of DAZN on this board.....and this was before the…

[QUOTE=KTFOKING;19205281]Surely you were just arguing to argue. From all reports, it is a two year deal with a six year option. There is a reason Hearn was only offering three fight deals to fighters as he couldn't guarantee them more…