On Saturday night at the T-Mobile Arena in Las Vegas, Canelo earned a unanimous decision over Daniel Jacobs with three world titles on the line. 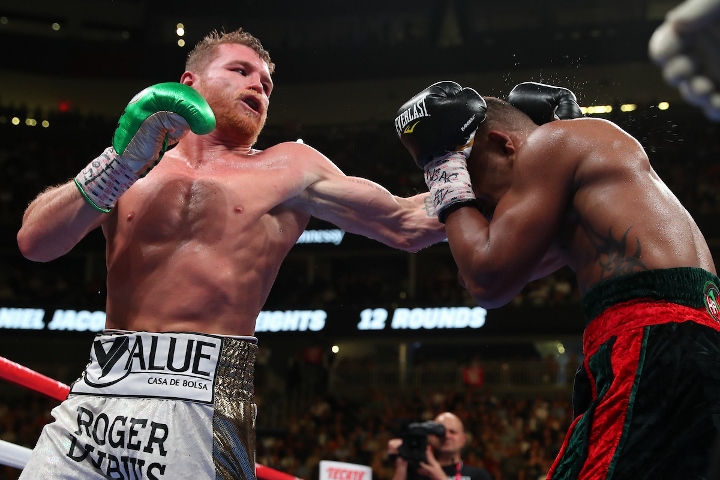 Reynoso was very impressed with his boxer's work during the fight and had him make adjustment as the contest played out.

"I loved the way he flexed his waist, his work off the ropes when Jacobs had him against the ropes, but I really like how he moved his waist," Reynoso said.

"We saw that he was working the head too much, but because of Jacobs mobility he was always taking a step back, getting off-balance and creating problems, so we kept telling him to go for the shoulders, work more on the shoulders, because then he'd get him."

This was Canelo’s first fight of 2019, but the second fight of his five-year 11-fight $365 million deal with the boxing streaming service DAZN.

Since losing to Floyd Mayweather in 2013 Alvarez has gone 10-0 with one draw including five knockouts.

Technically, Canelo is still the WBA "regular" champion at super middleweight - a title he won in December with a three round blowout of Rocky Fielding in New York City.

They would like to face WBO 160-pound champion Demetrius Andrade, should he defeat Maceij Sulecki next month.

If they are unable to make a deal to face the WBO champion, then Reynoso would like to see Canelo unify titles at 168 - where a big money bout with Callum Smith could be waiting.

[QUOTE=Liondw;19719738]Spare a thought for Jermall Charlo. Yes, he was unimpressive against Korobov, but he is the no. 1 contender for the WBC title, the mandatory, and just doesn't get a shot. Charlo would possibly make a better fight of it…

[QUOTE=factsarenice;19720801]Fact, both Lomachenko & Crawford beat everyone & moved up twice. Spence is the only guy that has never ever fought outside of one weight division.[/QUOTE] Lomachencko and Crawford are also in situations where the biggest fights for them that…

[QUOTE=factsarenice;19720801]Fact, both Lomachenko & Crawford beat everyone & moved up twice. Spence is the only guy that has never ever fought outside of one weight division.[/QUOTE] Unlike Lomachenko and Crawford, Spence Jr is in a loaded division at 147lbs and…

Fact, both Lomachenko & Crawford beat everyone & moved up twice. Spence is the only guy that has never ever fought outside of one weight division. [QUOTE=hitking;19720436]Dare to be great, I love it. I’m sick of so called elite fighters…