The middleweight showdown went the distance in Las Vegas, where the judges scored the 12-round fight in favour of Canelo (52-1-2) at T-Mobile Arena.

IBF holder Jacobs (35-3) was fined for missing weight at a contractually agreed-upon weight check on the day of the fight. 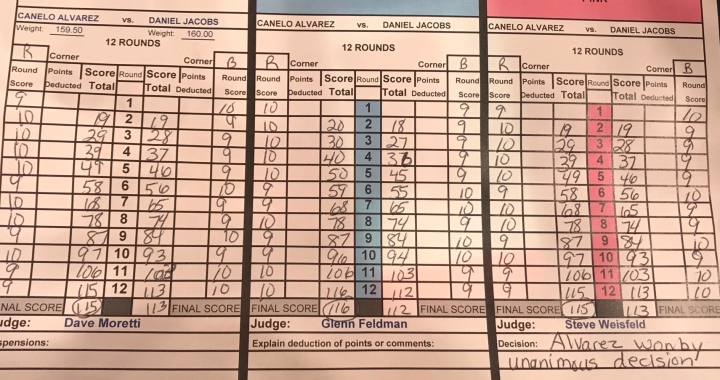 The meeting still went ahead and Canelo – fighting for the first time since his win over Rocky Fielding in December – was too efficient with his punching, passing a tough test against Jacobs as he moved within one belt (WBO) of becoming the undisputed middleweight champion.

It was a very even opening round in Las Vegas but Jacobs appeared the busier of the two fighters as he tried to generate some momentum against the explosive Mexican – taking part in his second fight since signing a lucrative deal with DAZN.

The second round was tight again, though the pair started to exchange more punches, with Jacobs finding the head and the body, while Canelo landed a clean body shot before the bell.

Canelo continued to stalk Jacobs – who was diagnosed with bone cancer in May 2011 but returned the following year – landing some uppercuts in the third round and he looked the more comfortable fighter through to the fifth.

Jacobs appeared to tire and needed to come out of his shell, with Canelo landing punches more regularly, though the American managed to get back into the sixth round after switching to a south-paw stance.

A flurry of punches rattled Jacobs in the eighth round as the crowd noise grew in anticipation, but he responded strongly by striking with a succession of body shots and uppercuts to halt Canelo's momentum as the duo stood toe-to-toe.

The bout came to life during the closing rounds as Canelo – unbeaten since his loss to Floyd Mayweather Jr in 2013 – and Jacobs showed plenty of power, without landing the pivotal blow.

While Jacobs took the fight to Canelo late in the clash, it was not enough to stop the latter from celebrating his 52nd professional victory.

Thought Canelo won the last two rounds, don't know how 2 judges gave those 2 for Jacobs. I also had Jacobs in 10,9,8. I'll have to re-watch but I don't see any possible way Jacobs won that fight.

[QUOTE]Andrade nexx !! which will make Canelo..... undisputed it looks like Andrade is about to increase his fanbase by 97,000 and then, they will be gone..... and Andrade will be alone like Kovalev[/QUOTE] wow, whoever wrote that smart post deserves…

[QUOTE=KnickTillDeaTh;19720694]Above is a great example of a child who doesn't get his way. Called out on your lack of knowledge, bested by your own argument, which resulted in your complete melt down underscored by an emotional outburst. As I said…

[QUOTE=NachoMan;19719556]OMG. "I am legitimate because I write for 3 boxing websites!" Hahahaha! So does my little brother. Does that make you a professional journalist or some other kind of authority on boxing? You started with that little bit of chest…

115-113 looks good, great job by the judges they got it right, fun fight both talented fighters.