Canelo Says His Coach Felt Fielding Was Perfect Foe at 168

Canelo will challenge Fielding for the WBA "regular" title on December 15th at Madison Square Garden in New York City.

"They told me there was the opportunity to win a 168-pound title and I would be one of the only 10 Mexicans to win titles in three divisions ... And if [the Fielding fight] is what Eddy wants, that's what we will do," Canelo said to ESPN Deportes. 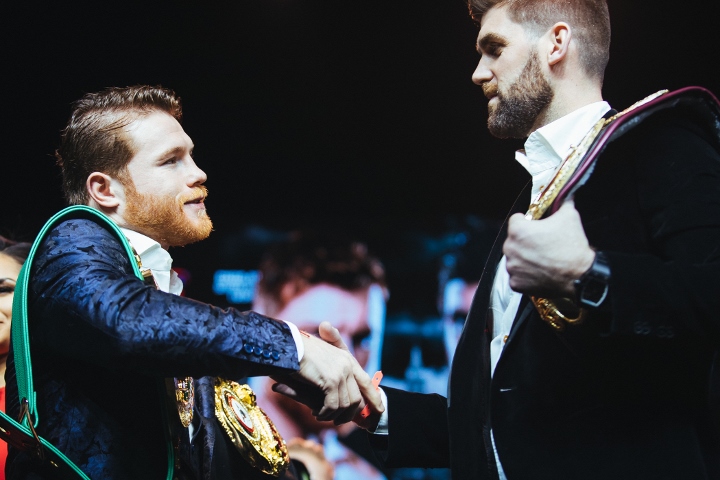 "Several years ago we wanted to fight in New York, we had been offered to fight there several times and for one thing or another it wasn't done, but today we have the opportunity to be there, and for me it is a motivation, one more story in my career - to be in Madison Square Garden, where characters like Muhammad Ali have fought, being there is a great achievement for me," Canelo said.

If Canelo wins, he will join a select group of Mexican boxers to win three world titles - fighters such as Julio César Chávez, Juan Manuel Márquez, Marco Antonio Barrera and Erik Morales, among others.

Canelo also established that in addition to the large amount of money that was offered to sign a contract with DAZN, the Mexican star indicates that the ability to help the fans save money was another consideration for him.

"That caught our attention, that they pay less to see a Canelo fight. For me it caught my attention, because a lot of people who like boxing could not see me because they does not have the financial resources. And today, with this [deal], I liked the idea very much," Canelo said

Yea move up and fight the paper champ that'd lose to anybody legit. Knew little chance of beating Ramirez and def not smith that would be like Garcia moving up to fight Porter instead of Spence or Crawford.

[QUOTE=Robi13;19282859]Or the idiots that think ggg really tied the title defense record.[/QUOTE] If only GGG defended it against world champs such as world class Steve Frank.

[QUOTE=filup79;19283607]Canelo's titles Mathew Hatton- Vacant WBC 154 title at a catch weight of 150 that he failed to make but still was able to win the title. Austin Trout- WBA Regular 154 title (Floyd was the super champ) and vacant…

[QUOTE=Slowhand;19282722]"Title" my azz. - If GGG fights and beats (big ifs) Callum, Canelo could become Golovkins mando. Oh the irony. :boxing:[/QUOTE] Canelo would love it. He can tax that ass again. Watch GGG turn into a jabbing machine again, trying…