Canelo on Ryan Garcia: 'If He's Happy, That Keeps Me Happy'

Canelo Alvarez showed outward signs of support to Golden Boy stablemate and co-training partner Ryan Garcia on social media throughout the last week as the touted prospect went on a Twitter tirade expressing disdain toward his promoter.

Alvarez was retweeting much of Garcia’s since-deleted tweets about his displeasure with how his career was handled by Golden Boy following the cancellation of his fight Saturday against Avery Sparrow after Sparrow was arrested for gun charges before the weigh-in.

On Wednesday, the sun was shining again and it was all smiles and Hallmark cards between all camps when Garcia agreed to a new multi-year promotional pact with Golden Boy. He also signed to fight Romero Duno as the co-featured attraction to Alvarez’s bout against Sergey Kovalev on Nov. 2 in Las Vegas. 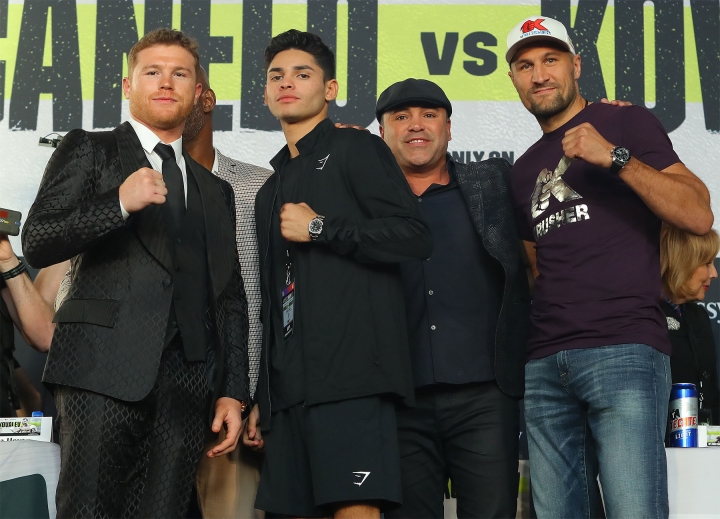 Alvarez, who shares a gym in San Diego and a trainer in Eddy Reynoso with Garcia, was pleased to learn that Garcia’s promotional problems are now resolved.

“The reality is that he is a fighter with a lot of talent. I’m glad he made this decision to sign his contract. If he’s happy, that keeps me happy. At the end of the day, it’s for his well being,” said Alvarez.

Oscar De La Hoya mended the muddied relationship and struck a deal with the 21-year-old even though Garcia was repeatedly calling him out on Twitter.

“I was like, ‘c’mon Ryan! I thought we were boys!’” said De La Hoya as he was reading Garcia’s Twitter tantrums. “We just talked it over, and we’re extremely happy.”

Garcia was pleased to finally put the tumultuous last week behind him as well.

“Families fight, but everything works out in the end,” Garcia assured. “We’re all good now.”

[QUOTE=Jab jab boom;20070056]lil bro? I don't even know how they're cool. They don't even speak the same language. Do they just smile awkwardly, give thumbs up, and high five each other every time they're together?[/QUOTE] No, they **** each other…