Canelo Needs To Face a Legitimate Threat in Near Future

It isn’t much of a fight at all. It’s a Top 10 pound-for-pounder against a fighter who, by all accounts, has ordinary ability. Alvarez is moving up to 168 pounds to face a natural super middleweight but the disparity in talent renders the size difference meaningless.

Yes, we all know that anything is possible – Buster Douglas was a 42-1 underdog against Mike Tyson, after all – but c’mon.

And it definitely isn’t a championship fight, as it’s being billed. Fielding holds what the WBA calls its “world” title by virtue of his knockout victory over the great Tyron Zeuge in July. The fact is the title is bogus. Callum Smith, the same Callum Smith who stopped Fielding in one round in 2015, is the sanctioning body’s super – or actual – titleholder.

The promoters are using the secondary title for marketing purposes, claiming Alvarez will make history by winning titles in three weight classes if he wins. We know better.

What IS Alvarez-Fielding? It’s a safe way to kick off the middleweight champ’s new, $365 million relationship with the subscription streaming service DAZN. And, in my opinion, that’s perfectly fine.

It’s in effect an extra bout for Alvarez, who normally fights only in May and September. The matchup won’t generate the subscription numbers DAZN will need to make its investment in the Mexican star payoff but it will whet the appetite for bigger things to come at 160 pounds, where Alvarez figures to settle after Saturday. That could be a third meeting with Gennady Golovkin or one with Daniel Jacobs, the two fights fans most want to see. 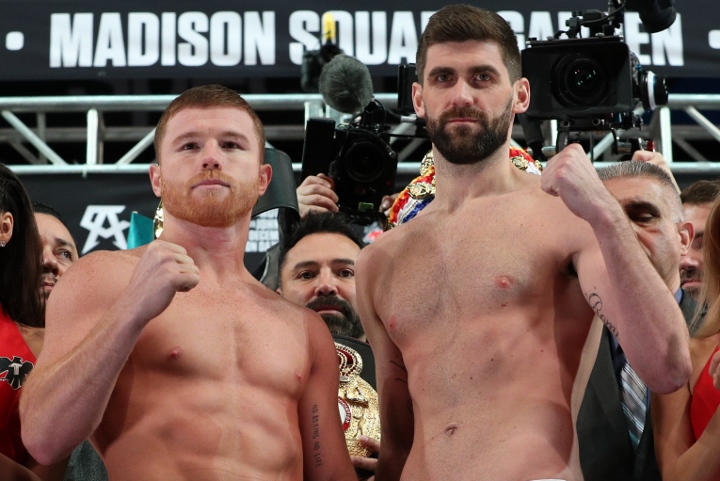 I’m a little uneasy that Alvarez’s May opponent probably will be an easier option or someone like David Lemieux, a stablemate at Golden Boy Promotions and only a somewhat bigger threat than Fielding, instead of Golovkin or Jacobs but I don’t have a huge problem with it.

Remember: Boxing is a business. The fighters risk life and limb every time they step through the ropes; they deserve to make as much money as possible.

Alvarez is coming off a title-unification victory over Golovkin in their September rematch, which put him in a position of great power. From a business standpoint, it makes sense for him to milk that good fortune for all it’s worth.

That’s at least part of the reason he will have faced Fielding and Lemieux in consecutive fights instead of Golovkin and Jacobs.

And DAZN obviously has its strategy. It undoubtedly wants to build interest – and capital – before investing in a superfight between its star attraction and one of his two biggest rivals, which would be much more expensive than matchups with Fielding and Lemieux.

That said, Alvarez and DAZN had better step up his opposition in September or risk alienating fans. And they had better hope either Golovkin or Jacobs is available.

As Keith Idec reported for BoxingScene, DAZN and partner Matchroom Sport have tried to bring Golovkin into the fold, which would faciliate a third fight with Alvarez. Jacobs, too, is unaffiliated at the moment and considering his options.

If they decide to go a different direction – perhaps choosing to fight one another a second time – then Alvarez and DAZN could be without his biggest foils when it’s time to step up.

Of course, there are other intriguing foes. For me, an Alvarez-Jermall Charlo fight would be at least as fascinating as another go with Golovkin or a fight with Jacobs. A title-unification bout with Demetrius Andrade would be interesting. And a meeting with former titleholder Billy Joe Saunders, who is trying to rebuild his career after a failed drug test and other issues, would be a legitimate challenge.

The point is this: The fans want exciting matchups.

Is anyone excited about Alvarez-Fielding outside their immediate circles? I doubt it. And while Lemieux probably will help produce an entertaining scrap, we all know he doesn’t match up well with Alvarez.

Fans aren’t stupid. They will say immediately after the Lemieux fight is announced that Alvarez isn’t taking any risks under his new arrangement with DAZN. Mark my words. That will reflect poorly on both the fighter and the platform, which is the last thing they want in the early stages of their relationship.

Alvarez and Co. need to pull out all stops to lure a legitimate threat into the ring next September 14 or they will have a big problem.

I dont agree with this, he just fought GGG twice and although I think he lost both fights he at least showed he was willing to get in the ring and face a real challenge.

agree with the topic of this article, Canelo team should fight some real threat other than those bums. But all in all, I do believe canelo is the strongest and best fighters in the current middle weight. Charlo and Jacbos…

[QUOTE=TonyGe;19362346]I said for the third time I would comment on catch weight fights but don't approve of them. What's so hard to understand. Jesus your thick..[/QUOTE] then why were you valiantly defending Golovkin's 164lb catchweight demand on Ward two days…

Jacobs, Charlo, Saunders. Canelo NEEDS to fight one of these guys on May 4th.

floyd canelo fans... catch weights are garbage! floyd beat canelo! ggg wasn't a real champ because he was wba regular champ(there was no super for much of this time) CANELO FOUGHT FIELDING BECAUSE HE WAS CHAMP!