If Canelo Alvarez and Floyd Mayweather Jr. are to fight again, their rematch cannot be contested below the middleweight limit of 160 pounds.

Alvarez revealed during a conference call Tuesday that he wouldn’t be able to get lower than 160 even for what would be a very lucrative second fight against Mayweather. The Mexican superstar suffered the lone loss of his career against Mayweather in a junior middleweight match five years ago in Las Vegas.

“I can’t go down further than 160 pounds,” said Alvarez, who’ll make his super middleweight debut December 15 against WBA world champ Rocky Fielding at Madison Square Garden. “If that fight were to take place, it would have to be at 160 pounds.” 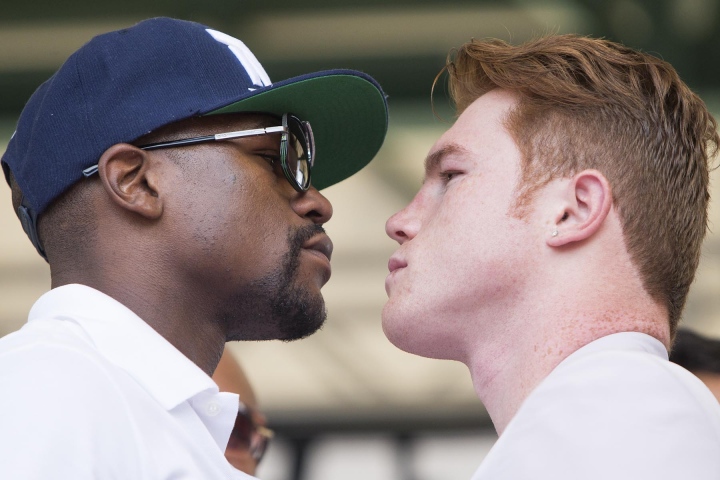 The 28-year-old Alvarez (50-1-2, 34 KOs) repeatedly has expressed a desire to fight Mayweather again. The 41-year-old Mayweather (50-0, 27 KOs) retired for the third time following his 10th-round stoppage of UFC superstar Conor McGregor in August 2017 in Las Vegas.

Speculation persists that the undefeated Mayweather will come out of retirement yet again for another rematch – a second showdown with Manny Pacquiao. That would require the Philippines’ Pacquiao (60-7-2, 39 KOs) to defeat Adrien Broner (33-3-1, 24 KOs, 1 NC) in their Showtime Pay-Per-View main event January 19 at MGM Grand Garden Arena in Las Vegas.

Regardless, Mayweather never has boxed above the junior middleweight limit of 154 pounds, the limit for his wins against Oscar De La Hoya, Miguel Cotto and McGregor.

When Mayweather and Alvarez fought in September 2013, Mayweather made Alvarez weigh in even lower than the junior middleweight limit of 154 pounds. Their contracted catch weight for that 12-round championship match was 152 pounds.

Alvarez moved up to middleweight two years later for his victory over Cotto. That WBC middleweight title bout was contested a contracted limit of 155 pounds, though, five pounds below the middleweight maximum of 160.

A confident Alvarez is convinced his improvement since suffering a majority-decision defeat to Mayweather would enable him to win their rematch.

Mayweather, meanwhile, would be at least 42 if he were to agree to face Alvarez again. The five-division champion is much closer in age to Pacquiao, who’ll turn 40 on December 17.

“I’m a more complete fighter now,” Alvarez said. “It’ll be much more competitive. I have more experience. I have improved a lot, so it would be different. It was experience who defeated me that night, and that’s why it was a boring fight as well, because he didn’t really do much to me, either. So it was experience. And I have more experience now, and I’m a much more mature fighter. I’m better than the fighter who fought that night.”

Mayweather is old now and officially retired from boxing. So let him remain retired and continue to make his money on the side.

You all act like he’s out here calling out Mayweather for a fight. He keeps getting asked questions about it and he answers and those quotes get pulled. Sure he would take the fight but only at his weight on…

Ain't no rematch happening clownello. Save your redball breath. you lost every round.

[QUOTE=j.razor;19302836]T.B.E. is done fighting the competition. We should let the man retire in peace while he collects his checks for fighting fighters with other combat skills.[/QUOTE]I do hope he's done, however there's a lot of talk about fighting Pacquiao, and…