Canelo Lawsuit: Contracts And Statement Of Arbitration Ordered By Court

Saul ‘Canelo’ Alvarez remains in search of answers regarding the language in the contract existing between his promoter and broadcast partner.

By Monday, the courtroom overseeing their multimillion-dollar lawsuit will have that information.

It was a good week for Alvarez’s attorneys, who saw a ruling in their favor regarding its Notice of Related Civil Cases filing, requesting for the two existing complaints in this ongoing legal battle to be heard in the same courtroom.

The U.S. District Court for the Central District of California agreed with Alvarez, as both their case along with the one filed by DAZN Media, Inc.—requesting the case be moved back to federal court—are now in the hands of Hon. Percy Anderson.

A hard deadline is now in place for the defendants—DAZN, Golden Boy Promotions and Oscar de la Hoya, et al—to submit the existing contracts to the court.

“The Court orders the parties to meet and confer and file, by no later than October 26, 2020, copies of both contracts at issue in the litigation,” Judge Anderson stated to all involved parties in an official order, a copy of which has been obtained by BoxingScene.com. “Although the Declaration of David Livshiz (one of several attorneys representing DAZN) filed in support of the Notice of Removal appears to quote the arbitration clause of one of the two contracts, neither the Complaint nor the Notice of Removal attaches the contracts.

“Because the contracts contain confidentiality provisions, the Court authorizes the parties to file those contracts under seal.” 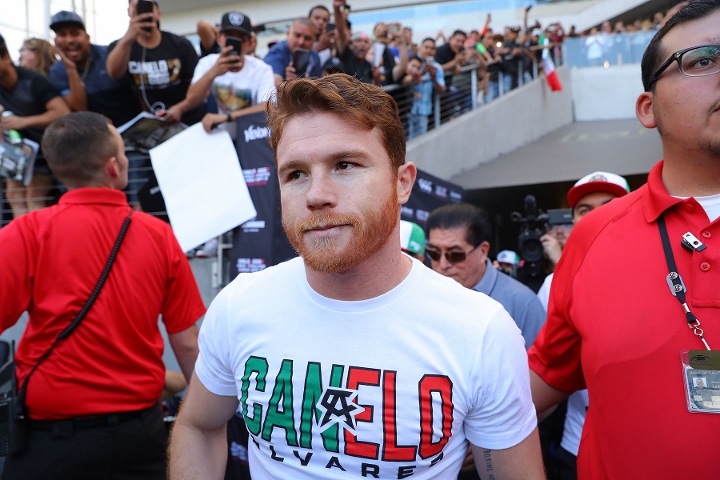 DAZN Media, Inc.—one of nine specific defendants named in Alvarez’s lawsuit seeking damages of at least $280 million—file a Notice of Removal earlier in the month, seeking for the case to be moved from Los Angeles Superior Court back into federal court where the case first began this past September. Alvarez initially filed a lawsuit with the U.S. District Court on September 8, with the case dismissed without prejudice just three days later due to lack of jurisdiction.

The order from Hon. Anderson in the dismissal was for Alvarez’s team to amend its filing to accurately identify the defendants and their location. Such measures were taken by The Maloney Firm, representing Alvarez and S.A. Holiday Inc., only for the case to have been filed in state court rather than resubmitted in the federal courthouse.

Rather than respond to receipt of acknowledgement, the law firm of Frankfurt Kurnit Klein & Selz PC—representing DAZN Media Inc.—filed a Notice of Removal to Federal Court on October 8, citing Diversity Jurisdiction as grounds for removal. Ground for the filing alleged that the case is a matter of citizens of different states and citizens of foreign states.

Mexico’s Alvarez (53-1-2, 36KOs) filed a complaint alleging breach of contract, intentional interference with contract, negligent interference with contract; fraud and concealment; and breach of fiduciary duty. The pound-for-pound king and three-division titlist is seeking damages of at least $280 million, the remaining balance on his contract with Golden Boy Promotions (GBP) for services provided to DAZN-USA upon their record-breaking 11-fight, $365 million deal reached in October 2018.

A major sticking point in the case is whom exactly owes Alvarez the money if in fact he is entitled to a full payout. It has been learned that the terms of the deal call for DAZN to pay Golden Boy Promotions at least $40 million per show involving Alvarez, who is not directly involved in that contract other than his promoter delivering his services.

Golden Boy has a separate contract with Alvarez, calling for the California-based promotional outfit to pay Alvarez a minimum of $35 million per fight which began with his May 2019 middleweight title unification win over Daniel Jacobs.

Alvarez is just three fights into his 11-fight deal, the first fight coming at a discount of sorts as he earned $15 million for a 3rd round knockout of Rocky Fielding in December 2018. Alvarez has not fought since an 11th round knockout of Sergey Kovalev to claim a light heavyweight belt last November in Las Vegas. The fight came days after the revelation of the fractured relationship between Alvarez and de la Hoya, beginning with the manner in which he was stripped of one of his middleweight titles last summer.

Ordered negotiations with IBF mandatory challenger Sergiy Derevyanchenko instead exposed a breakdown in communication between Alvarez and Golden Boy Promotions. Several deadlines were missed along with ordered purse bids delayed before a decision was reached for Alvarez to forcefully vacate his title.

Soon thereafter came an agreement to face Kovalev, although the damage was done by that point. A decision was made to move forward in a professional capacity, with that part of the relationship to have continued in the form of a shot at unbeaten super middleweight titlist Billy Joe Saunders this past May.

The event fell through due to the ongoing coronavirus pandemic, which has proved problematic in getting Alvarez and DAZN on the same page for financial terms regarding a fight absent fans given the current global health crisis. Alvarez conditionally agreed to a purse reduction, though the two sides never came close to agreeing on a specific figure.

As time was wasted, Alvarez instead took measures to get what he feels is contractually owed to him. The bombshell lawsuit has prompted all involved parties to further discuss a plan for the sport’s leading attraction to return to the ring sooner rather than later.

An hours-long meeting held in late September offered hope for resolution. Instead, Alvarez proceeded with his ongoing lawsuit, with the complaint making the rounds before winding up back in the original courthouse as where the case began nearly two months ago.

Previous comments from the defendant side suggest that both DAZN and Golden Boy prefer for this case to move forward to arbitration. Before that can happen, the court needs to proof of such terms given the Notice of Removal filed by DAZN Media suggesting such existing language.

[QUOTE=Al Broker;20837727]Says the GGG fanatic.[/QUOTE] GGG has flaws and stuff to criticize. Just the stuff he gets critiqued for on here is way over the top. Like how some people try and say Canelo got 6 rounds in either fight…

[QUOTE=Boxing-1013;20837696]I don't really get into the weeds on details with Canelo fanatics. What's the point. Their mind is made up already[/QUOTE] Says the GGG fanatic.

[QUOTE=Al Broker;20837657]When you can’t refute points your type of reply is expected. ;)[/QUOTE] I don't really get into the weeds on details with Canelo fanatics. What's the point. Their mind is made up already