It took two weeks they seemingly didn’t have to waste, but BoxingScene.com confirmed that promoters for Canelo Alvarez and Sergey Kovalev were in the process Wednesday of finalizing a deal for their November 2 fight in Las Vegas.

Kovalev became the clear frontrunner to become Alvarez’s next opponent as soon as he knocked out Anthony Yarde in the 11th round August 24 in Chelyabinsk, Russia, Kovalev’s hometown. Eric Gomez, president of Golden Boy Promotions (Alvarez), and Kathy Duva, CEO of Main Events (Kovalev), have spent the past two weeks slowly but surely completing their deal.

They worked out the most significant remaining contractual issue Wednesday, a fact first reported by Sports Illustrated’s Chris Mannix. An official announcement will be made soon to confirm a 12-round, 175-pound title fight DAZN will stream live in the United States. 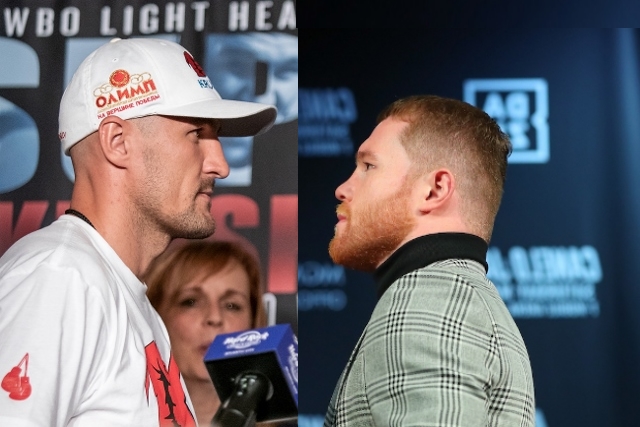 The Athletic’s Mike Coppinger first reported Sunday that the deal was nearing completion. The aforementioned lingering issue required three more days of negotiations to settle, but there’s nothing now expected to prevent them from moving forward with the Alvarez-Kovalev fight.

An agreement was considered almost a foregone conclusion throughout their negotiations because Alvarez wants to fight Kovalev next, Kovalev will make a career-high, eight-figure purse and Kovalev is one of the few available boxers that DAZN executive chairman John Skipper placed on his list of acceptable opponents for Alvarez.

Skipper wanted Alvarez to fight Gennadiy Golovkin a third time after signing the middleweight rivals to multi-fight contracts worth nine figures apiece over the past 11 months. Alvarez has refused to accept another fight against Kazakhstan’s Golovkin (39-1-1, 35 KOs), who’ll fight Ukraine’s Sergiy Derevyanchenko (13-1, 10 KOs) on October 5 at Madison Square Garden.

The Mexican superstar instead will move up two weight classes to challenge Kovalev for his WBO light heavyweight title.

Their fight will take place seven weeks from Saturday night at MGM Grand Garden Arena. Four of Alvarez’s past five fights have been held at T-Mobile Arena in Las Vegas, but that building isn’t available November 2 because the NHL’s Golden Knights are scheduled to play a home game that night against Winnipeg.

The 29-year-old Alvarez (52-1-2, 35 KOs) hasn’t fought at MGM Grand Garden Arena since he scored a controversial, split-decision win over Erislandy Lara in July 2014. His fight versus Kovalev will mark this third appearance on DAZN since he signed an 11-fight deal with that fledgling streaming service last October that could become worth $365 million.

The 36-year-old Kovalev (34-3-1, 29 KOs) received a three-fight contract to fight on DAZN as part of his deal to battle Alvarez. Kovalev’s partnership with DAZN could conclude with a fight against WBA light heavyweight champion Dmitry Bivol, but Bivol (16-0, 11 KOs) has been working with DAZN on a bout-by-bout basis.

Gomez and Duva first discussed an Alvarez-Kovalev fight for September 14, and later for October 26. That was when Kovalev was considering paying England’s Yarde (18-1, 17 KOs), who was Kovalev’s mandatory challenger, a seven-figure sum to step aside and allow him to fight Alvarez next.

Kovalev eventually decided he couldn’t withdraw from a fight in his hometown, which had already been announced.

Yarde hurt Kovalev badly late in the eighth round of their bout. A resilient Kovalev recovered by the start of the ninth round, however, immediately regained control of their fight and knocked out an exhausted Yarde with a jarring jab in the 11th round.

Alvarez convincingly defeated Daniel Jacobs in his last fight. He defended the WBA and WBC middleweight titles and won the IBF belt by beating Brooklyn’s Jacobs (35-3, 29 KOs) by unanimous decision in their 12-round, 160-pound championship unification match May 4 at T-Mobile Arena.

Alvarez since has been elevated to “franchise champion” by the WBC. He also was stripped by the IBF for failing to make a deal to fight Derevyanchenko, who was his mandatory challenger.

[QUOTE=Squ□redCircle34;20053344]You’re comparing a career light heavyweight who has the build of a cruiser weight to a career jr middleweight now about to fight in his 5th weight class! Then you bring up Pacman so that tells me Canelo is doing…

[QUOTE=MeanestNiceGuy;20053415]Sounds like it's damn near a done deal, too![/QUOTE] It’s all about that coin This will be huge to casuals once their informed lol

[QUOTE=fernandtg;20052463]Most decorated, yes, but arguably best in the division? Are you living 5 years ago? Dude just got almost stooped by a green guy that didn't even spar. :lol1: At this stage, Kov gets soundly beaten by any of the…

Canelo is the bravest fighter in the world