Canelo: Jacobs Has Never Faced Anyone Like Me Either, I'll Adjust!

WBC, WBA middleweight champion Canelo Alvarez is confident in his ability to adapt to the fighting style of IBF champion Daniel Jacobs.

Canelo and Jacobs will collide on May 14th at the T-Mobile Arena in Las Vegas. And only one of them will walk away with three world titles.

For Canelo, it's his first bout since heading up to the super middleweight division of 168-pounds back in December to score a knockout of Rocky Fielding for the WBA "regular" title. 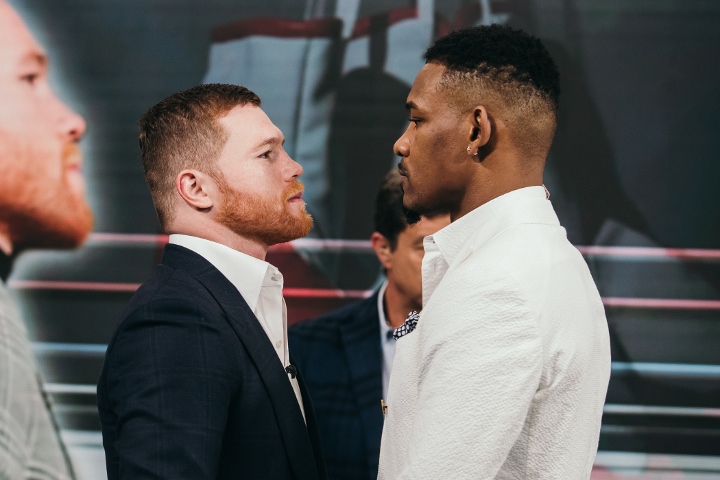 Jacobs believes Canelo will be shocked on fight night.

While being the underdog, Jacobs feels that his size, combined with his speed and boxing ability, is something that Canelo has never faced before.

"We'll see on May 4th, we can say a lot of things, but when you're in the ring and when you see the other fighter that surprises you, it's very different. It's good that I'm going to try to work as hard as possible because it's a sign that it will be a great fight," said Canelo to ESPN Deportes.

Canelo stressed that he has a real interest in being an example for Mexican society and reiterated that the country needs more people, more athletes to paint the right picture.

"Mexico must have athletes and examples for the people," said Canelo. "People who bring the country forward, who (thanks to them) know the country and talk about Mexico outside the country."

[QUOTE=mcdonalds;19556884]Canelo is white. I'm white so I have a say on who's going to be accepted into our race. I look in the mirror and see a Canelo.[/QUOTE] Did someone hack your account? Never saw you in this form before!:lol1:

[QUOTE=whoseyourdaddy;19558998]I don't know that I would like this fight so much, I like both guys, and Spence is my boy from here in Dallas, and I think that Canelo would be too much for him at 160, maybe if they…

[QUOTE=mcdonalds;19556884]Canelo is white. I'm white so I have a say on who's going to be accepted into our race. I look in the mirror and see a Canelo.[/QUOTE] An than you Måsturbate right? lol :gay:

[QUOTE=BoxingIsGreat;19556707]I get your point. But who out there at 160 or 168 is better than Spence? I'll wait. Spence is one of the best fighters in the world, and beating him will enhance Canelo's resume.[/QUOTE] I don't know that I…

[QUOTE=T.M.T;19556692]No bet I don't do that but I'm very confident that Jacobs will win. 🥊[/QUOTE] Strike # 52, you are glutton for punishment aren't you? although I agree is a very dangerous fight for both, but knowing your lame resume…