Saul ‘Canelo’ Alvarez continues to serve as among the most bankable boxing stars in the world—even if his latest returns pale in comparison to his own lofty standards.

The reigning World middleweight champion added another belt to his collection in a 12-round win over Daniel Jacobs in their May 4 title unification headliner at T-Mobile Arena in Las Vegas, Nevada. The event generated a live gate of $8,685,750 from 15,730 tickets sold, according to final receipts submitted to the Nevada State Athletic Commission.

Another 1,388 complimentary tickets were issued for the event, accounting for a total of 17,088 in attendance. The final figure falls more than 3,000 short of the announced crowd of 20,203 on fight night. 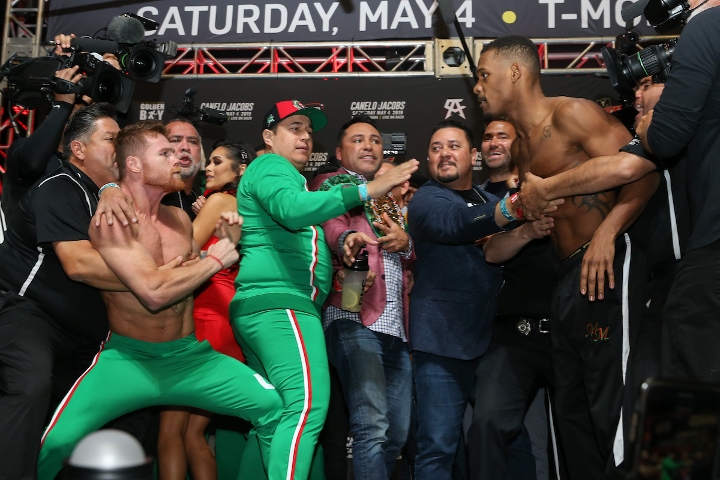 The returns make for by far the best-selling live gate for a boxing event in 2019, far exceeding the $6 million in ticket sales generated from the January 19 Showtime Pay-Per-View event in Las Vegas, topped by Manny Pacquiao’s 12-round win over Adrien Broner.

In fact, the final figures represent his lowest-performing night at the box office since he helped christen the T-Mobile Arena with his May ’16 knockout win over Amir Khan. That event generated just over $7.4 million in ticket sales, along with another $30 million or so in PPV revenue.

His clash with Jacobs (35-3, 29KOs) wasn’t afforded such a luxury, as it streamed live on DAZN, with whom Alvarez signed a 10-fight, $350 million contract last year. The deal also came with an additional $15 million payday for his at New York City’s Madison Square Garden last December, when he knocked out Rocky Fielding in three rounds.

That event along with his most recent victory over Jacobs generated massive subscription sales to the sports streaming service. However, the revenue generated from sales doesn’t directly translate to profit margin for a given event, as many viewers signed up for the annual subscription rate given the savings over a 12-month period ($8.33 per month for a one-year subscription) compared to $20 for a single month purchase.

As it relates to his recent Vegas performances, the May 4 show saw a massive 68% decline from Alvarez’s win over Gennady Golovkin in their rematch last September. The anticipated sequel generated more than $27 million at the live gate, eclipsing their first fight—which sold nearly $24.5 million in tickets—to rank third on the all-time list of the largest grossing gates for Las Vegas boxing event.

The only two events besting Alvarez’s pair of fights with Golovkin are Floyd Mayweather’s respective wins over Pacquiao ($72.2 million in ticket sales for their May 2015 pound-for-pound showdown) and Conor McGregor ($55.4 million for their Aug. 2017 money grab).

The May 4 event lands 34th on Vegas’ all-time list, falling just short of Pacquiao’s 2nd round knockout of Ricky Hatton in May 2009 ($8.83 million) but eclipsing Pacquiao’s 12-round win over Timothy Bradley in their April 2014 rematch ($7.87 million).

In his 10 headlining bouts in Las Vegas, Alvarez has now generated nearly $124 million just at the live gate alone, owning six of the 36 highest grossing events in the town’s history.

His five appearances at T-Mobile Arena have grossed $78 million in ticket sales, not to mention the amount of revenue generated through sponsorship and circuit viewing.

DAZN paid about $40 million just to these two boxers. I doubt they made up any money on the fight.

DAZN is in trouble with the Alvarez contract. He'll be fighting Saunders soon and very soon ... to see if the Brits can help balance that contract cost.

[QUOTE=bigdunny1;19740926]A few comps GGG vs Jacobs did a live gate of 3.7M. Canelo vs that same opponent just did almost 9M. The only other PPV fighter fought in Vegas earlier this year and drew 6M and that was with Pacquiao…

[QUOTE=budfr;19743258]PPV does not xist anymore...Canelo is the cash cow, get over it.[/QUOTE]Not anymore with those numbers baby! They sucked! Pay Per View is here to stay.