Canelo: I've Done What I Had To Do Against Golovkin

Canelo Alvarez apparently doesn’t agree with his promoter’s stance on the need to fight Gennadiy Golovkin a third time.

Oscar De La Hoya, whose company promotes the Mexican superstar, told the Los Angeles Times earlier this week that we “will absolutely see Canelo and GGG fight next year.” Alvarez dismissed that idea during an interview with BoxingScene.com prior to a press conference Wednesday in Los Angeles to officially announce his fight against Sergey Kovalev. 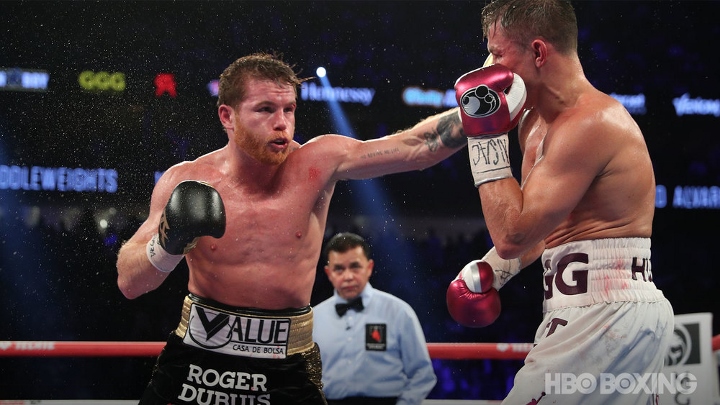 Alvarez, 29, will move up two divisions, from the middleweight limit of 160 pounds to the light heavyweight maximum of 175, to challenge Kovalev (34-3-1, 29 KOs). DAZN will stream their 12-round fight for Kovalev’s WBO light heavyweight title November 2 from MGM Grand Garden Arena in Las Vegas.

Golovkin, meanwhile, is preparing for an October 5 bout against Sergiy Derevyanchenko. They’ll fight for the IBF middleweight title that was stripped from Alvarez once his team couldn’t come to an agreement with Derevyanchenko’s handlers for a mandatory defense.

Kazakhstan’s Golovkin had hoped to fight Alvarez again September 14, but Alvarez refused to even consider that third fight. DAZN executive chairman John Skipper signed Alvarez and Golovkin to nine-figure contracts in part because he wanted a third Alvarez-Golovkin fight to boost subscriptions for that streaming service.

“Let me say this, as I told you before, I was ready to fight [Alvarez] in September,” Golovkin said last month while in New York to promote his fight versus Derevyanchenko. “It was their decision not to, so let them sort their own things out. And let them make [up] their own mind. Ask them. I will move on.”

Golovkin (39-1-1, 35 KOs) suffered the lone loss of his career to Alvarez (52-1-2, 35 KOs) in their rematch a year ago, a 12-round majority decision in what was a very competitive fight. Their first fight resulted in an infamous draw two years ago at T-Mobile Arena in Las Vegas, also the site of their rematch.

The 37-year-old Golovkin obviously wants a third fight, but he has an alternate plan in the event he defeats Derevyanchenko (13-1, 10 KOs) two weeks from Saturday night.

“We’ve already been in a situation where this fight has been canceled or postponed,” Golovkin said, referring to his rematch against Alvarez. “So, we’re living in a situation where we don’t know whether it’s going to happen or not. So, we have a new partnership with DAZN. We have a new plan. So, let’s not just concentrate on Canelo. Let’s just move on and see what’s gonna happen.”

[QUOTE=Ake-Dawg;20076334]I don't think you understand how much more comfortable you get fighting a guy after the first fight. So the 2nd fight was easier on Alvarez than the first. Why would the 3rd be harder than either of the first…

[QUOTE=ruedboy;20077226]That's what you got to like about boxing, it always comes down to opinions, and everybody's got one. Cheers[/QUOTE] Indeed. Cheers!

[QUOTE=texasboi15;20075678][B][SIZE="5"]BWaHaahaHA!!![/SIZE][/B][/QUOTE] Whats so funny? Hes a boxer that fights in his own natural weight class. I.e. not a fighter that uses drugs to seemingly go up and down when he wants to cherry pick vulnerarable opponents.

[QUOTE=Ake-Dawg;20077193]Murray's is the best of those three and he was just a fringe contender. Lemieux even though he lucked into a belt, was trash. Even in their last days, Cotto and Mosley were better fighters than the three you mentioned.…