Canelo: If Mayweather is Hurt By My Deal - It's His Problem!

Mexican superstar Canelo Alvarez (50-1-2, 34 KOs) is not concerned with the circumstances which prompted Floyd Mayweather (50-0, 27 KOs) to attack him on social media.

A few days ago, Canelo officially announced that he signed a five year, $365 million deal with DAZN.

The streaming service has a hold on Canelo's next 11 fights. 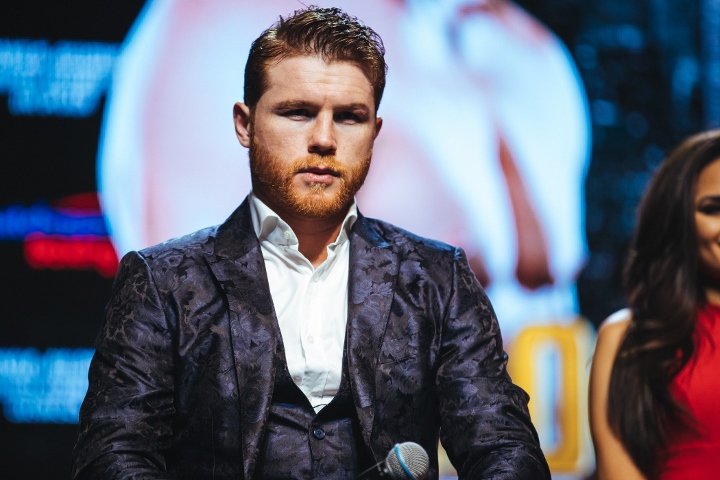 And the first fight of that deal will take place on December 15th, when Canelo moves up to the super middleweight limit of 168 to challenge WBA "regular" champion Rocky Fielding.

Mayweather picked apart that agreement - and dominating Canelo back in September 2013.

"It didn’t matter if Canelo ate his PED steak or not this night, this was by far the easiest fight of my career," Mayweather said on social media.

"Connor McQuitter was a way better fighter than Canelo's cheating ass and I beat the breaks off him too! It takes me 36 minutes or less to make $300 million plus. It literally takes me 1 night and 1 fight to make what you might make in 5 years and 11 fights! So really, who's still winning? You do the math!"

Canelo is not going to dwell on whether or not Mayweather is upset over the 11 fight deal.

"I'm not really that kind of person who starts putting stuff on Instagram or Twitter to offend a fighter or wanting to make a fight like that. If he wants to make a second fight, talk and we can do it. I would never in my life put myself in the position that he puts himself in. If he's hurt by what happened [with DAZN], it's his problem," Canelo told media members.

"It did not surprise me but he doesn't have to do it. Each person makes his career and his life... if he's by hurt what happened, it's not my problem.. each person gets what he deserves."

[QUOTE=Death_Adder;19210187]I only post facts. If the truth hurts, your life must really suck.[/QUOTE] No, you need to grow the hell up and stop hiding behind a computer with your racist bigotry!!

[QUOTE=hugh grant;19209354]Don't be harsh on Nell floyd.After all a Nell win is a win for floyd? Every win Nell has makes Floyd look better? If Nell keeps winning[B] Floyd may one day be goat?[/B][/QUOTE] He will never be the GOAT,…

It's only there online. Canelo did go after Floyd first. Yes canelo has a decent deal with Dazn. Though Floyd did have at the time a six fight deal with showtime for 300 million. Plus ppv. Then the 5th fight…

[QUOTE=Boxing Hero;19209022]Canelo is way more mature than Floyd. Mayweather is very petty and a attention horse. Anytime anyone is shinning Mayweather comes back like a desperate ex-girlfriend. Mayweather please save up your money and retire!!!!![/QUOTE] This is fact..and Floyd can't…