LAS VEGAS – In an atmosphere befitting the biggest boxing match of the year in the United States, Canelo Alvarez and Gennady Golovkin finally faced off Friday afternoon.

Before Friday, the middleweight rivals hadn’t come face-to-face since a press conference nearly seven months ago in Los Angeles. Once they weighed in at T-Mobile Arena, Alvarez and Golovkin didn’t go forehead-to-forehead long because their trainers and others stepped in to separate them.

Golovkin called Alvarez “a clown” when he was interviewed following that scuffle. 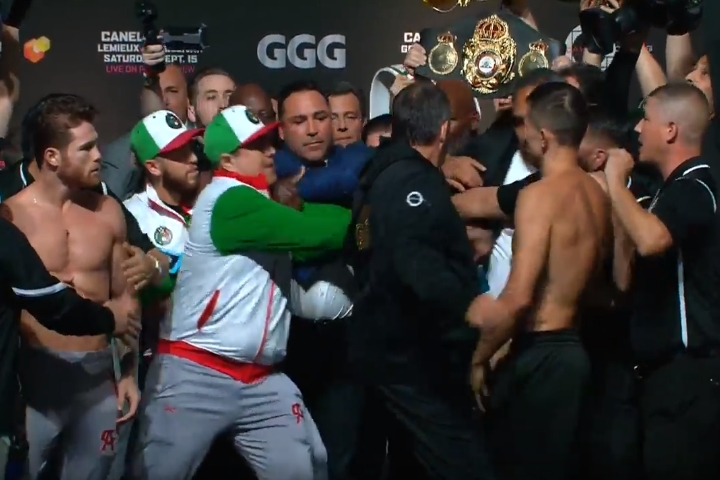 For Golovkin, it was a face-off he sought since their rematch was rescheduled for Saturday night at T-Mobile Arena. The WBA/WBC/IBO middleweight champion claimed Alvarez couldn’t look him in the eye because Alvarez feels guilty about failing two performance-enhancing drug tests in February for clenbuterol.

That controversy, which led to Alvarez’s six-month suspension and the cancelation of their May 5 fight, has generated even more interest in their rematch than the 12-round fight that resulted in a dubious draw last September 16 at T-Mobile Arena.

Kazakhstan’s Golovkin, 36, and Mexico’s Alvarez, 28, each made weight for that highly anticipated fight Friday.

The opener of HBO’s broadcast will feature former pound-for-pound king Roman “Chocolatito” Gonzalez in a 10-round super flyweight fight against Mexico’s Moises Fuentes.

The 31-year-old Gonzalez, a former champion in four weight classes, hasn’t fought since Srisaket Sor Rungvisai (46-4-1, 41 KOs) knocked him out in the fourth round of their immediate rematch last September 9 at StubHub Center in Carson, California.

Quote: Originally Posted by PunchyPotorff View Post Friend, Canelo's a he!!uva lot more popular than your idol GGG. That's why. Now go relax with a nice dinner, a few beers, and a nap. You don't need the stress. LOL [QUOTE=Jab…

[QUOTE=LADIV;19107692]you were saying......none of that ish mattered that you mentioned..canelo is levels above ggg...[/QUOTE] cut your d**k riding out. You say He's levels above but was outlanded overall yet again, outworked again, outlanded in 8 of 12 rounds and clearly…

[QUOTE=Jab jab boom;19099434]it's just another sign of weakness that he feels that he needs these extra edges. That's why he used peds, that's why he wanted to use some homemade boxing gloves, use shady wraps, because deep down he's trying…

[QUOTE=Billycostigan;19099459]Whatever you say. Hopefully come Sunday morning you'll have a new hero to root for after Golovkin lays waste to that a**clown. Canelos going to sleep bruh, take that sh** to the bank[/QUOTE] Triple b I t c h and…