Saul ‘Canelo’ Alvarez has finally made his choice.

The long-awaited decision on a next date and opponent has finally been made, as Guadalaraja’s Alvarez (53-1-2, 36KOs) has settled on arguably the most dangerous option. The pound-for-pound king will next face Liverpool’s Callum Smith (27-0, 19KOs), with their super middleweight championship to take place December at a location to be determined in Texas.

Alvarez confirmed the news via his Instagram Live channel on Tuesday.

Smith will attempt the third defense of the title he won in a 7th round knockout of George Groves in September 2018. Alvarez owns a secondary version of the title, though a win here will earn him the right to declare himself a true four-division titlist.

In a surprise twist—given all that has gone on for the past few months—the bout will air live on DAZN, marking Alvarez’s triumphant return to the sports streaming service with whom he was fighting in court just a few weeks ago. The reunion came after Alvarez successfully severed ties with Golden Boy Promotions, with whom he originally inked a record-breaking $365 million contract to join DAZN in October 2018.

For this fight, Alvarez will work with Matchroom Boxing’s Eddie Hearn—whom also serves as the lead promoter for Smith. For now, it's a fight-by-fight relationship with Hearn and DAZN and currently only for the December 19 headliner. 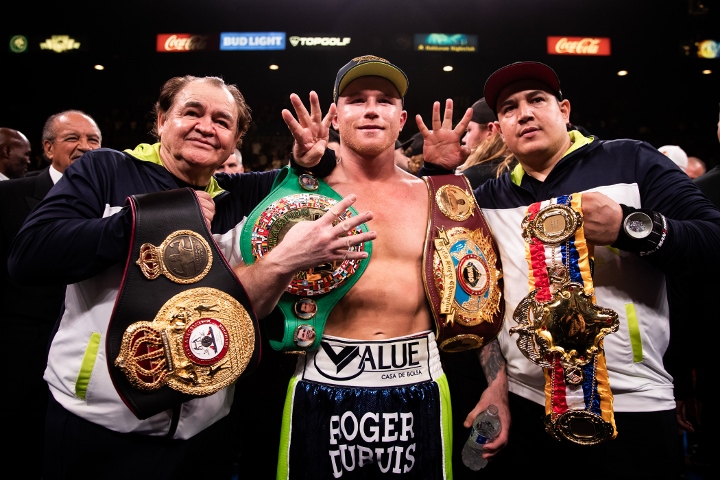 Alvarez has been out of the ring since his 11th round knockout of Sergey Kovalev to win a light heavyweight title last November in Las Vegas. The win netted the Mexican superstar a third true divisional title, having claimed lineal championship status at junior middleweight and middleweight.

Some view Alvarez as a four-division titlist, while others disregard the secondary super middleweight title he won in a 3rd round wipeout of Rocky Fielding. Their December 2018 meet at Madison Square Garden in New York City marked the first fight for Alvarez under his then newly-signed DAZN deal, which ultimately lasted just three bouts.

In between knockout wins over Fielding and Kovalev, came a 12-round decision win over Daniel Jacobs in their three-belt middleweight unification clash last May in Las Vegas.

Somehow, Alvarez has been permitted to retain titles at middleweight and super middleweight. As such, the fight with Smith will represent a title consolidation clash.

Smith has made two successful defenses of the title thus far. The 30-year old Brit scored a 2nd round knockout of two-time Olympian and former secondary middleweight titlist Hassan N’Dam N’Jikam last June at Madison Square Garden, followed by a hard-fought, albeit disputed 12-round win over countryman John Ryder last November in his Liverpool hometown.

The entirety of Smith’s 2020 campaign has been spent hunting bigger game, as he and trainer/manager Joe Gallagher have made clear in no uncertain terms their eagerness to land a megafight.  That wish comes true, as there isn’t a more lucrative option at or surrounding the super middleweight division.

Alvarez settled on Smith after having previously discussed with Premier Boxing Champions (PBC) the possibility of a Pay-Per-View headliner with unbeaten 168-pound titlist Caleb Plant (20-0, 12KOs). The timing couldn’t be made to work, although PBC remains open to revisiting such plans at any point in 2021 should the offer still stand.

For now, Alvarez will stick it out with his old platform though without the services of Golden Boy Promotions.

The two had been together for more than 10 years, though their relationship was severely strained last summer. Alvarez was forced to vacate one of his middleweight titles due to the mishandling of an ordered mandatory title defense versus Sergiy Derevyanchenko, with things only growing worse in the ensuing months.

Their contentious relationship was on full display during fight week for his challenge of Kovalev’s light heavyweight title, ultimately marking their last event together. There were plans in place for Alvarez to face England’s Billy Joe Saunders (29-0, 14KOs) this past May in Las Vegas. A scheduled announcement for the event never saw the light of day, instead giving way to the initial wave of the ongoing coronavirus pandemic.

Saunders was one of four boxers targeted by Alvarez in an aggressive bid to fight before the end of 2020. The 31-year old southpaw from Hatfield, England was fully on board the first time around but didn’t seem to gravitate towards such talks on this occasion. Instead, he will enter a voluntary title defense with countryman Martin Murray, due to take place December 4 at Wembley’s SSE Arena in London, England.

[QUOTE=Death_Adder;20898642]Weakest opponents? Tell me who these killers that he should be fighting then? He's campaigning at 168 now, lets look at the champs. WBC - Vacant Benavidez too undisciplined to keep that belt. Doesn't deserve a fight. WBO - Billy…

[QUOTE=Zodogg;20898597]I see ur a Mexican beefeating nuthugger Too if Canelo so great why did Dazn backup on the guarantee.. because he was fighting the weakest opponents in the three weightclasses he dance around in so u shut the fuxck up…

[QUOTE=Zodogg;20898597]I see ur a Mexican beefeating nuthugger Too if Canelo so great why did Dazn backup on the guarantee.. because he was fighting the weakest opponents in the three weightclasses he dance around in so u shut the fuxck up…

[QUOTE=Al Broker;20895732]Lol. Canelo is P4P #1!! Canelo haters online exagerrating circumstances make no difference. Youre witnessing greatness! ;)[/QUOTE] Just facts bro Canelo is only great in ur mind his greatness come from fighting catchweights and fighting the weakest links to…