Canelo Alvarez’s private jet touched down at Million Air, a luxury airport on the outskirts of San Antonio, and the boxing superstar emerged wearing designer floral print pajamas and an unbuttoned pea coat. The flight landed at midnight on Tuesday morning, so it was understandable that Canelo would want to be as comfy as possible for his two-and-a-half-hour jaunt from San Diego. The comfort continued once he entered the bubble at the Grant Hyatt: Canelo was seen walking to different fight week engagements in different pairs of extraordinarily expensive pajamas.

Two things were obvious watching him stroll around in extravagantly patterned silk all week: (1.) This is an almost unfathomably rich man who can do whatever he wants and no longer has to care what people think, and (2.) More pertinently, he could not have been more relaxed, or less worried about his ability to beat Callum Smith.

On Saturday night, he made it look as easy as a nighttime jaunt in his Gucci set, routing Smith by scores of 117-111 and 119-109 twice to capture the legitimate super middleweight crown, and a major title in his fourth separate weight class.

It should have been a clue that Canelo felt he had this fight in the bag when he effectively chose to fight the best 168-pound fighter in the world on four weeks’ notice. The bout was formally announced on November 18, and actually occurred 31 days later.

Often times the result of a bout can retroactively discredit the quality of it, or its participants, so it’s worth noting: according to research done by Ring Magazine’s Tom Gray, this was only the 20th occasion in 82 years that reigning Ring Magazine champions fought one another. It was a momentous occasion, a terrific fight to make, and one that would have been hotly contested if Canelo Alvarez weren’t the very best fighter in the world today.

The ease with which Canelo nullified Smith’s offense all night was remarkable to watch. In a general sense, it takes a special level of skill to be able to move forward and make your opponent miss. In this bout, it was a necessity for Canelo, who gave up seven inches in both height and reach, but it’s also his preferential fighting style anyway. He’s one of the few fighters in the world who don’t have to negotiate between elite defense and true power punching, so he doesn’t. He uses both. 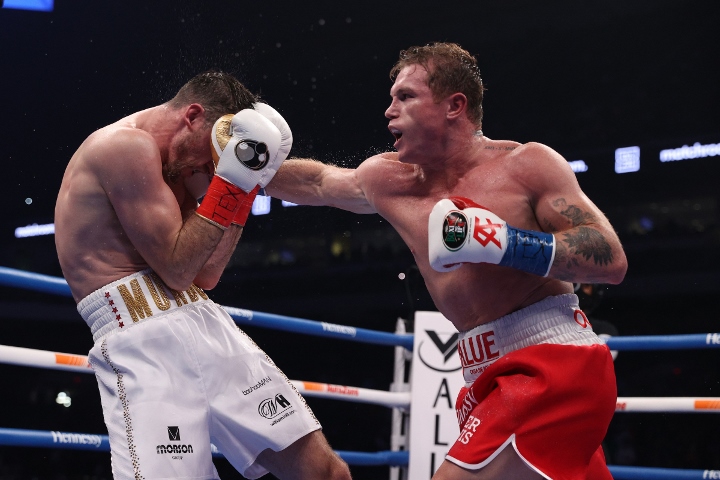 Statistically, Canelo held Smith to landing just 18.4% of his punches, while landing 43.3% of his own, according to CompuBox. Canelo made Smith miss 440 punches in total on the night. More impressive than the numbers themselves was the way he managed to do it.

While there were sequences in which Canelo slipped and rolled that could be used in a highlight pack, the majority of the Smith shots that didn’t connect failed to do so because Canelo just casually parried them away. Smith was a physical challenge for Canelo, a good puncher who had flashed a devastating hook from long range in the past, and yet Canelo was so unconcerned with the shots he opted to just let them travel their course and catch them in his palms like he was playing long toss in the outfield with a teammate.

In between rounds, in the second half of the fight, Canelo eschewed his stool and opted to stand up. Sometime he would dance to whatever song DJ Dubbz was playing for that minute, sometimes he would just pace back and forth and have to be meekly reminded by a Texas commission member to stay somewhat in the area of his corner. In general, he looked like a man worried about anything other than what his opponent could do to him.

Perhaps that’s because, at a certain point, he knew precisely what Smith was going to try. There was a moment with about 1:40 left in the final round caught on the DAZN telecast when Smith attempted a left hook coming off the ropes that missed by about a foot. Canelo pointed to his left arm as if to say “I know what you were trying to do,” and the two fighters shared a laugh in the middle of a prizefight.

Smith finally realized in that moment what Canelo knew when he buttoned up his pajamas and got on his jet: there was no chance Smith was going to win this fight. For the rest of the fight, after their moment of bonding, Smith took to the perimeter and simply tried to get to the finish line, blatantly holding in an attempt to eat up as many seconds as possible. Though Canelo still threw a few hard shots, it was evident that he was showing some humility, letting up just enough to let the champion hear the final bell before he took his titles.

After the final bell, Canelo’s mind was already moving to other challenges. Earlier this year, Canelo told reporters he was considering retiring by 37 and focusing on his golf game. Though a relative newcomer to the sport, he is seemingly somewhat of a prodigy on the links as well, even winning the Korbel Closest To The Pin Challenge on NBC earlier this year against noted golf ringers such as Stephen Curry. As he walked back to his corner with the fight complete, he immediately found his golf buddy and instructor Aaron Dexheimer in the crowd and pantomimed his swing.

In the locker room after the fight, a dejected Smith nursed a gruesome triceps injury that some speculated might have come from absorbing Canelo’s hooks. He said he looked forward to spending the holidays with his family. Before he left and packed up to fly home, he received an early gift, a memento of his darkest hour in the ring for which he should feel no shame whatsoever: his ring gloves, signed by Canelo, with the inscription “Thank you, Champ.”

Canelo left the Alamodome in a “4X Champ” hat he had made presuming the outcome. When he landed back home, after a deserved rest in his trendy pajamas, he would swap the hat for a different one with a play on his fighting catchphrase, which simply reads “No Golf, No Life.”