The sport’s leading attraction now has a home for his long-awaited ring return.

Saul ‘Canelo’ Alvarez’s upcoming showdown with unbeaten super middleweight titlist Callum Smith (27-0, 19KOs) has landed at The Alamodome in San Antonio, BoxingScene.com has learned. The multi-purpose venue—which seats up to 72,000 during healthier times—will be configured to allow as many fans as social distancing parameters will allow for their December 19 headliner, which will air live on DAZN-USA.

“I am thrilled to be back at the Alamodome and very thankful to be fighting in front of my fans on December 19,” said Alvarez, who fights in the Lone Star State for the first time since 2016. “I have great memories of my previous bouts in Texas, and I expect this to be a special fight to close out the year.”

News of securing the location comes days after Guadalajara’s Alvarez (53-1-2, 36KOs) confirmed the date for his next fight, ending months of speculation on his next opponent and weeks of wondering which platform would be honored with presenting the event. 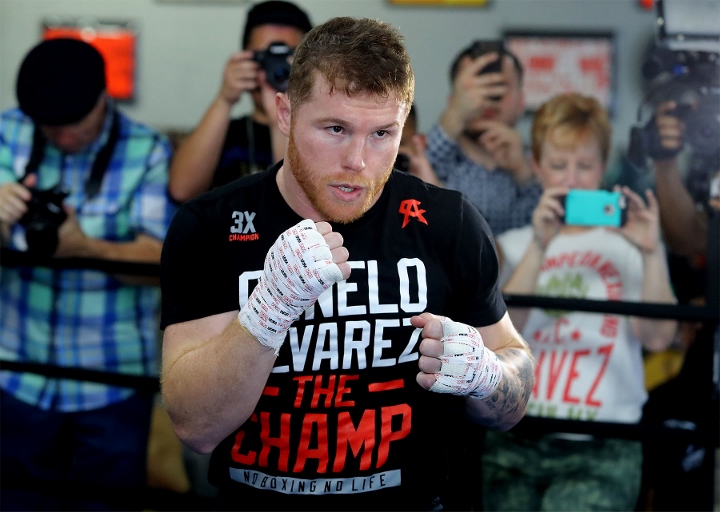 The only missing piece to the puzzle was the exact site, which remained in question at the time of Alvarez’s well-received announcement via his Instagram Live channel in pursuit of a true title win in a fourth weight division.

Alvarez and his team—headed by Jose ‘Chepo’ and Eddy Reynoso—settled on The Alamodome in San Antonio. The 30-year old global superstar played the venue in an April 2013 title-unifying 12-round win over Austin Trout, also claiming the lineal junior middleweight championship in the process.

The upcoming event will undoubtedly come in a much smaller crowd than Alvarez’s last visit on site. His title-unifying win over Trout took place in front of an announced crowd of 39,247. The all-time record for a boxing event at the venue remains the September 1993 pound-for-pound clash between Julio Cesar Chavez Jr. and Pernell Whitaker, which played to a confirmed crowd of 58,891 who bore witness to the controversial 12-round draw in a Showtime Pay-Per-View headliner many felt should have landed well in favor of Whitaker.

“It’s fantastic news to be able to hold this great fight in front of fans and in a great stadium like the Alamodome,” said Eddie Hearn, managing director of Matchroom Sport, who will present the event. “It’s a fight that deserves to be witnessed in the flesh and those fans that snap up the hottest ticket in town next week will be in for a brilliant night of action, topped by the pound-for-pound king taking on the number one Super-Middleweight in the world – a simply unmissable occasion for those in attendance and watching live on DAZN.”

The Alamodome played a significant role in boxing during the pandemic, hosting the October 31 Showtime Pay-Per-View event topped by Gervonta Davis’ highlight-reel 6th round knockout of Leo Santa Cruz. The show took place with upwards of 9,000 in attendance, the first such show on a major U.S. platform—Showtime, Fox Sports, ESPN, DAZN—to take place in front of fans.

A similar backdrop was a major sticking point in Alvarez’s lone fight of 2020, which comes more than 13 months after his last ring appearance. The Mexican superstar captured a third divisional crown following an 11th round stoppage of Sergey Kovalev last November, which generated a live gate of $8,173,920 from 10,005 tickets sold at MGM Grand Garden Arena in Las Vegas.

The figures are eye-catching for nearly any other boxer. For the biggest star in the sport today, it was a bit of a letdown and in fact the third straight time where numbers decreased from his previous Vegas appearance. Alvarez’s 12-round win over Daniel Jacobs in their multi-belt middleweight title unification clash last May produced a live gate of $8,685,750 from 15,730 tickets sold.

Even with both figures paling in comparison to Alvarez’s rematch with Gennadiy Golovkin in September 2018—which generated $23,43,500 from 16,732 tickets sold—they were still good for the best two selling boxing events to take place anywhere in the United States in 2019.

With that came the challenge to maximize Alvarez’s box-office appeal during a pandemic-stricken 2020 where few boxing events since March have come with fans in attendance. The December 19 card will mark the first DAZN-USA show to enjoy such a luxury.

The title fight between Alvarez—who has claimed championships at junior middleweight, middleweight and light heavyweight—and Smith was shopped to various locations allowing fans in attendance, including AT&T Stadium in Arlington, Texas. The famed state-of-the-art stadium is home to the NFL’s Dallas Cowboys, who host the San Francisco 49ers that Sunday and with the venue committed to the Big 12 college football championship on fight night.

Such a location would have carried a fitting backstory. Alvarez played the venue once before, having scored a 9th round knockout of Liam Smith, Callum’s older brother in their September 2016 junior middleweight title fight. Their HBO Pay-Per-View headliner played to an announced crowd of 51,240 in attendance.

Also sought was NRG Stadium—home to the NFL’s Houston Texans—which would have marked Alvarez’s second career fight in the city. Alvarez scored a spectacular 3rd round knockout of James Kirkland in a May 2015 clash in front of more than 31,000 in attendance at Minute Maid Park, home to Major League Baseball’s Houston Astros.

Alvarez will now fight for the fourth time overall anywhere in Texas. The event will mark the first such appearance for Liverpool’s Smith. The 30-year old Brit’s lone other stateside fights have come in a 1st round knockout win in August 2014 at the famed StubHub Center (now Dignity Health Sports Park) in Carson, California and a 2nd round knockout of Hassan N’Dam N’Jikam in his first successful super middleweight title defense last June at Madison Square Garden in New York City.

Smith has not fought since escaping with a disputed 12-round decision win over countryman John Ryder last November at Echo Arena in his Liverpool hometown.

[QUOTE=_Rexy_;20901403]to be fair, Spence/Garcia was about as lopsided as Floyd/Canelo and somehow Canelo got six rounds on Ross' scorecard[/QUOTE] No it wasn’t. But lying seems to be common with people in general. Canelo landed more impressively on Floyd given the…

[QUOTE=_Rexy_;20901403]to be fair, Spence/Garcia was about as lopsided as Floyd/Canelo and somehow Canelo got six rounds on Ross' scorecard[/QUOTE] It’s canelo they always give him rounds.

[QUOTE=JcLazyX210;20901395]I thought Mikey was American. He was born in California lol. All jokes aside the fight was over before it started. Its hard to fake a complete robbery post 1990 boxing. Plus Spence is from Texas.[/QUOTE] to be fair, Spence/Garcia…

[QUOTE=Al Broker;20900336]So a Mexican just needs to fight like Mikey as in the Spence fight? Lol. Ok[/QUOTE] I thought Mikey was American. He was born in California lol. All jokes aside the fight was over before it started. Its hard…