The ageless Mariana Juarez will get to enjoy a timeless boxing tradition for her next fight.

Mexico City’s Juarez attempts the 10th defense of her bantamweight title as she faces countrywoman Yulihan Alejandra Luna (19-3-1, 3KOs) this Saturday at Grand Oasis Arena in Cancun, Mexico. The title fight will air live on Televisa and with fans in attendance, the latter marking the first such televised event in Mexico.

Representatives from Promociones del Pueblo informed BoxingScene.com that the Cancun government approved for Saturday’s event to take place with up to 30% capacity at the coastal venue. Previous events having been staged in Mexico have not only taken place behind closed doors, but without the presence of local boxing commissions due to government protocols disallowing their presence in the earlier stages of the ongoing coronavirus pandemic. 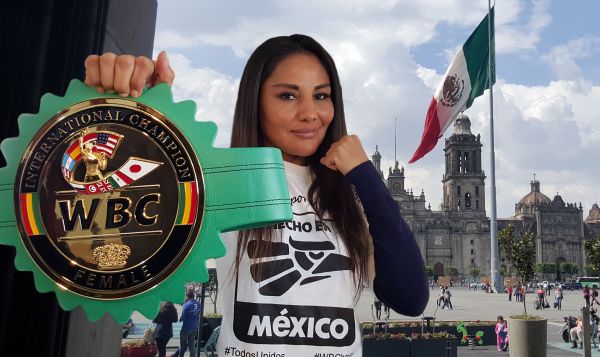 Those restrictions have since been lifted in some instances, including a show last Friday in Mexico City featuring Juan Francisco Estrada’s thrilling, off-the-canvas stoppage win of Carlos Cuadras in their title fight rematch. The show took place in the presence of the Mexico City boxing commission (Comision de Box Distrito Federal), with Saturday’s show serving under the supervision of Comision de Box Cancun.

The allowance of fans in attendance will make for a lively atmosphere, which will go a long way in the renewed three-year televised agreement between Promociones del Pueblo and Televisa. The show on Saturday is one of four confirmed televised dates in 2020, with future shows taking place November 21, November 28 and December 12.

Juarez enters her 25th career world title fight (along with seven interim title fights preceding her flyweight reign), eleven of which will have come in her current bantamweight reign. The 40-year old ring surgeon—considered high among the best fighters in the world today—has held a 118-pound title since April 2017, more than five years after enjoying a lengthy flyweight championship run.

The clash with Luna marks her first fight back in Cancun since December 2016, just prior to her claiming the bantamweight strap on the line this weekend. It will also serve as her first ring appearance anywhere since a 10-round decision win over Carolina Duer last October in Fresnillo, Mexico. The majority of career has aired live on Televisa, having served as a massive draw both in the ratings and at the box office.

Thanks to the efforts put forth by her promoter and the local government, Juarez gets to add to both legacies this weekend.