"I'm very pleased with this victory," said Andrew Cancio. "We worked hard for the win, and we knew it would turn out like this. It was a tough 10 rounds. No matter how hard you train or spar, you have to dig deep in a fight like that. I have to sit with my manager and with Golden Boy Promotions to see what is next, but I want a world title."

"I got the job done and it was a tough fight," said Greg Vendetti. "Kamegai is the toughest guy I've ever faced, whether on the street or in the ring. I did my best and tried as hard as I could to finish him in the end, but he can really take a punch."

"I have no excuses," said Yoshihiro Kamegai. "I did not do well. The long layoff does not matter. Once you start punching, it's all the same. Vendetti was the better fighter tonight." 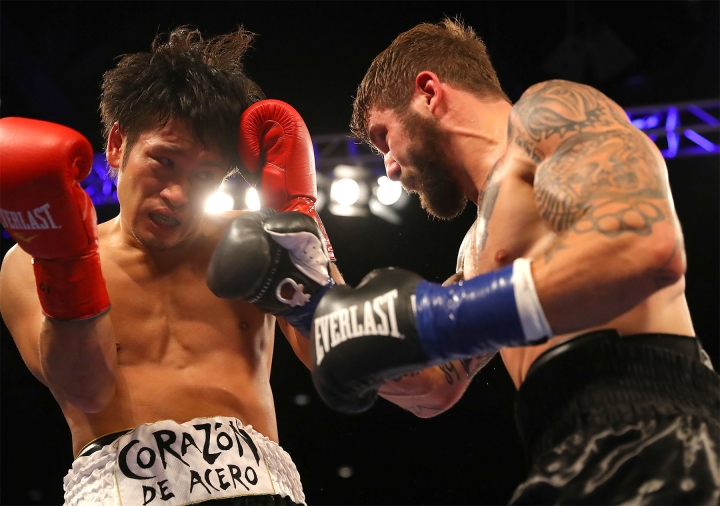 Luis Feliciano (8-0, 5KOs) of Utuado, Puerto Rico defeated Jonathon Fortuna (8-2, 5KOs) of Santo Domingo, Dominican Republic via fifth-round TKO with a series of vicious body shots in a fight originally scheduled for eight rounds in the welterweight division. The fight ended at 2:38 of the previously mentioned round.

"This was a very good win and I'm happy that I continue to improve with every fight," said Luis Feliciano. " I'm looking forward to coming back soon. I consider the body shot one of my signature punches. It's very effective, and that's how I got the victory tonight."

Anthony Reyes (3-0, 2KOs) of Coachella, Calif. scored a unanimous decision win against Luis Montellano (0-3-1) of Tijuana, Mexico in a four-round super bantamweight battle. Reyes won the fight with a score of 40-36 from all three judges.

"I want to thank my fans and my friends," said Anthony Reyes. "I have a big family. That's why there was so many people here to support me."

Shakhram Giyasov (4-0, 3 KOs) of Bukhara, Uzbekistan scored a knockout victory against experienced veteran Albert Mensah (31-7-1, 15 KOs) of Accra, Ghana in a fight originally scheduled for eight rounds in the welterweight division. The fight was stopped at 1:56 of the third round.

"I was one-hundred percent for the fight," said Shakhram Giyasov. "I enjoyed this fight and the result was the work of Joel Diaz in training camp. We are happy and pleased with the victory. Golden Boy Promotions and World of Boxing worked together to make this fight."

Rommel Cabellero (2-0-1, 1 KO) of Coachella, Calif. scored a first-round body-shot knockout win against Jahaziel Vazquez (2-8, 1 KO) of Saltillo, Mexico in a bout scheduled for six-rounds in the 130-pound division.

"I worked really hard for this fight," said Rommel Caballero. "The body shot has been my favorite punch since the amateurs, so I'm happy I won like this tonight."