Campbell is Ready: I'll Show How Good I Am Against Lomachenko

Luke Campbell is very excited about his upcoming contest, which is going to be a battle of Olympic gold medal winners with Vasyl Lomachenko.

The two lightweights will collide for the WBC, WBA, IBF world titles - likely on a date in August, in the UK.

The World Boxing Council ordered Campbell and Lomachenko to fight for the vacant WBC strap, which was vacated by Mikey Garcia, who back in March moved up by two weight classes to face welterweight champion Errol Spence. 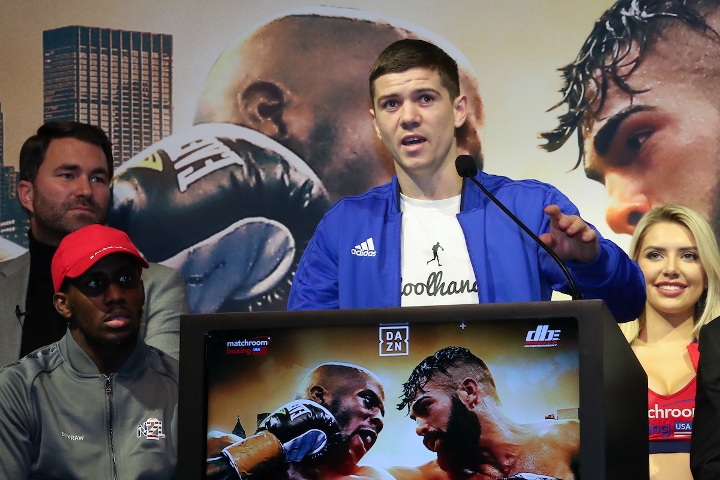 Both boxers won a gold medal at the 2012 London games. For Lomachenko, his second career gold.

Lomachenko is a huge favorite to beat Campbell. He's a such a favorite that most experts are already tabbing Lomachenko as being one belt away from winning a world title.

Campbell was expecting to face Devin Haney for the vacant belt, and he was surprised when the WBC selected a unified world champion of two rival organizations.

“I think everybody was [surprised] really. Because he [Haney] is the next man in line to fight for the title. It was a shock because we were expecting to fight him. That would have been a great fight. I think I would have whooped Devin Haney anyhow but that would have been a fantastic fight on paper,” Campbell told Boxing News.  “It is what it is. I’m not complaining. Everything’s about timing. I was going to fight him down the line anyhow. They’ve brought it forward. That’s fine by me.”

“Everybody’s going to be an underdog against Lomachenko. He’s ranked pound for pound number one. Everybody’s going to be an underdog against him. But I’ve always been underestimated, the whole of my career, from the day I started boxing. It doesn’t bother me that. I’m just excited now to go out there and show everybody what I’m capable of doing and how good I am. I’m fighting the best and I believe I’m one of the best, if not the best.”

[QUOTE=1hourRun;19729694]I agree with this comment to some degree, Mickey Mouse Garcia is the slippery cheese hungry rat mascot of PBC, however, Its clear Lomachenko fans don't want Vasyl to fight Teofimo Lopez. I think someone is a bit upset that…

If the wbc ordered this fight for a belt. Why wouldn’t Loma fight for it? Luke Campbell isn’t a tomato can. He’s a good boxer. Is he on Loma level I don’t think so. But this is how we find…

[QUOTE=1hourRun;19729694]I agree with this comment to some degree, Mickey Mouse Garcia is the slippery cheese hungry rat mascot of PBC, however, Its clear Lomachenko fans don't want Vasyl to fight Teofimo Lopez. I absolutely want to see him fight Lopez.…

Loma fighting a tomato can campbell soup lol. This sucks man. TR top dogs are having to face bumbs after bums.

[QUOTE=Satir;19728927]other champs didnt want that smoke and clearly avoided prime Loma 3G style[/QUOTE] I agree with this comment to some degree, Mickey Mouse Garcia is the slippery cheese hungry rat mascot of PBC, however, Its clear Lomachenko fans don't want…