Australian junior middleweight champion Joel Camilleri has a signed and framed photo of Kostya Tszyu hanging up in his bedroom, now he's looking to bring down the boxing legend's son Tim.

Victorian Camilleri (17-5-1, 8 KOs) will defend his title against Tszyu (12-0, 10 KOs) at The Star in Sydney on Wednesday, when the 24-year-old Sydneysider will headline a pay-per-view card for the first time.

Camilleri doesn't feel disrespected that the challenger has got most of the publicity in the lead-up to the fight, recognising the Tszyu name is a big selling point. 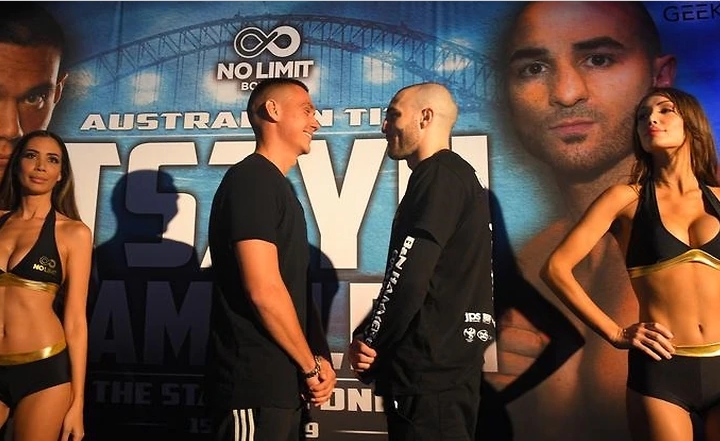 His appreciation of the Tszyu clan extends to his personal collection of boxing memorabilia.

"Yesterday I was going through my room looking at my frames with a mate and thinking Kostya Tszyu, here we go, I've got him on my wall and l'm fighting his son," Camilleri told AAP.

Tszyu said his father, who now lives in Russia, had studied his latest opponent and they had spoken about different game plans.

Tszyu is a strong favourite for Wednesday's fight, but Camilleri says he doesn't consider himself an outsider.

"I've been a pro since 2012 and a lot of people are saying 'who is this Joel Camilleri? He's a nobody'," Camilleri said.

"I'm not a joke, I'm going to win this fight and defend my title.

The challenger turned a little testy at Monday's media conference when asked for his tip.

"No more predictions man, lets just get in there and lets just fight," Tszyu said.

The mood was lighter when Camilleri responded to a comment Tszyu had made at a previous media appearance about rearranging Camilleri's face.

"My nose has been broken since I was four years old, it's free nose surgery," Camilleri quipped.

"I think nose surgery is about $5,000 so please straighten it this way mate."

Tszyu replied: "It's curved to the left, so I need to curve it to the right."

[QUOTE=bronx7;19741591]He has the outcome of the fight described perfect except Tszyu will be the fighter who is too strong and will brake him down and stop him late Tim gets the belt[/QUOTE] How highly you rate young Tszyu? Would be…