Smith was a frontrunner to face Mexican superstar Saul "Canelo" Alvarez on the Cinco De Mayo date of May 2nd in Las Vegas.

But Smith rejected an initial offer for the fight, explaining that it was low. Canelo and his handlers eventually went with WBO super middleweight champion Billy Joe Saunders. 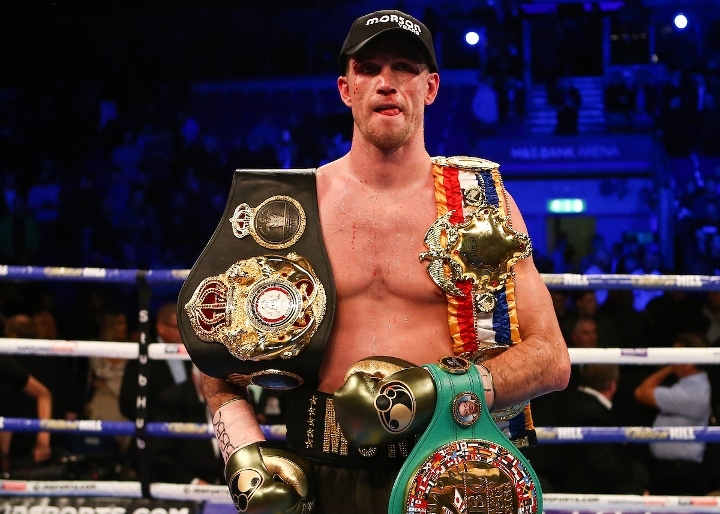 Smith was last seen in action back in November, when he won a tougher than expected twelve round unanimous decision over mandatory challenger John Ryder.

Smith's trainer, Joe Gallagher, would like to see his man in action in the very near future in a stay-busy fight, and then wants him to face a major opponent in the fall - and they don't care who that name would be.

But what Smith wants most is a unification with either WBC champion David Benavidez or IBF champion Caleb Plant.

"Callum has just had his mandatory, a tough mandatory with John Ryder," said Gallagher. "I would like to get Callum Smith out, a defence of his title, and then he can fight whoever is available in September.

"Whether it's GGG, Jacobs, John Ryder 2, Eubank, Kovalev, anyone. Callum has made it quite clear that he's got involved in boxing to win titles and prove he's the best. He's got the ranking, but he would love to unify the division, so that starts with a Plant or a Benavidez."

He needs to rematch Ryder. I would love to see Ryder beat Callum, then there should be a fight between Canelo and Ryder. That would be WAR!

Any fighter is willing to face any other fighter if the money is right. But if Canelo money isn't enough, does he take similar risk for whatever the others offer or wait on Canelo to come back later in the…

Wasn't willing to face a contract though.

[QUOTE=ceylon mooney;20463799]make the ryder rematch. everyone would watch it.[/QUOTE] He doesn't want to risk losing and blowing a bigger payday against one of the big boys. I think Smith/Plant is a natural fight to make at this point. Both have…

Smith vs. Golovkin or Smith vs. Benavidez would be excellent fights.