Callum Smith is Open To Moving Up To Fight Sergey Kovalev

Smith, who captured the WBA title last year by knocking out George Groves and winning the World Boxing Super Series tournament, is looking for the biggest fight possible at 168.

But it does not appear that a high level contest at super middleweight is on the horizon. 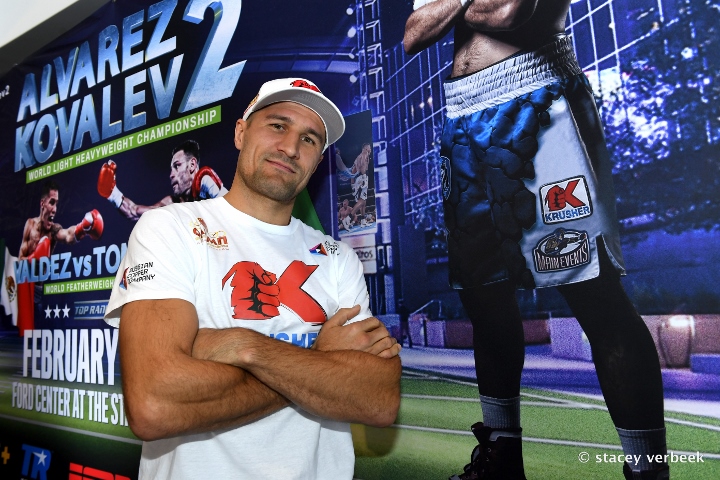 If Smith is not able to secure a major fight at 168, then he has no problem with moving up to light heavyweight to challenge someone like Kovalev.

"They're the big fights we want, and even with Kovalev winning at the weekend, there's a possibility if no one wants to dance with us at super middleweight, that we'd move up and fight Kovalev. I think that would get everyone excited, but they're the type of fights we want for Callum Smith.

"Callum Smith became the No 1 in the world, September last year. He's become a dad, he's back in the gym now and he's itching to get out. I'm wanting Callum to fight April, May time, whether that's here in the UK or in America. But we want the big fights, unification fights."

The biggest issue at hand in making Kovalev vs. Smith is the network. Smith, who is promoted by Eddie Hearn, fights exclusively in the United States on streaming service DAZN. Kovalev has a co-promotional deal with Main Events and Top Rank, and his next couple of fights will be carried by ESPN.

[QUOTE=SuperHanz;19494797]Krusher would beat him imo. Smith wouldn't have his usual size advantage.[/QUOTE] [QUOTE=4truth;19494825]Not the usual one but he'd still probably be bigger[/QUOTE] Smith would have 2.5 inch height and 6 inch reach advantage over Kovalev. That's how big he is.

Smith beats him. But let me guess, cause hes british if he wins its only because kovalev is 'old', it never counts when a uk fighter gets a good win.

[QUOTE=RJJ-94-02=GOAT;19495562]I’ve heard from a friend of mine who has it on good authority that it was lower than what he received for Chisora. Obviously without me confirming my source that doesn’t prove anything, but I 100% believe what he has…

Here is a concept, why dont Smith go to 175 and Ramirez go to 175 and maybe a deal can be worked out where they can unify WBO and WBA 168 titles but fight at 175. It seems they are…