To many, it was a flawless performance, but Smith noticed an advantage, one he plans on using if he lands a future bout against Alvarez.

“(Alvarez is) a very good fighter, I just think he’s a better middleweight than a super middleweight,” Smith told BoxingScene.com. “But I’ll definitely would love to test myself against him.” 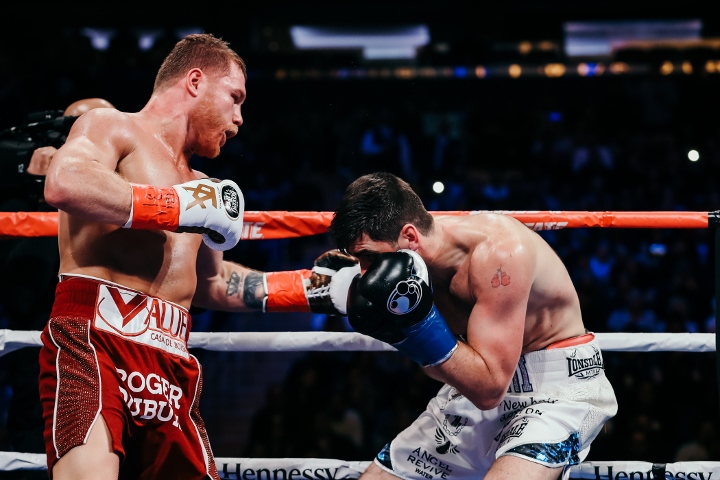 The fight between Alvarez and Fielding was a mismatch, as expected, even with Fielding having the size advantage. A bout with Smith would be a much more difficult task for Alvarez. Smith is regarded as one of the best fighters at 168 and has a six-inch height advantage over Alvarez.

Another edge for the 6-foot-3 Smith, it only took him one round to knockout Fielding in 2015. It would be a compelling matchup, but Smith doesn’t expect to get in the ring with Alvarez any time soon.

“I think (Alvarez is) going to stay at 160 for awhile,” Smith said. “I think he has a lot of fights there, but if he steps back up to 168 then I’d definitely put my hand up for that fight.”

Alvarez is scheduled to face Daniel Jacobs in a middleweight unification bout on May 4 in Las Vegas. If Alvarez prevails, all signs point to a potential trilogy bout with Gennady Golovkin in September.

But if Alvarez returns to super middleweight, Smith is likely at the front of the line. Both their promoters are in business with DAZN and they each have a WBA belt. In December, Golden Boy Promotions bosses Oscar De La Hoya and Eric Gomez hinted at potential Alvarez-Smith bout at Wembley Stadium in London.

Smith is penciled in to fight June 1 against an opponent to be named later on the Anthony Joshua-Jarrell Miller undercard.

The Smith family is familiar with Alvarez. In 2016, Alvarez recorded a ninth-round knockout against Smith’s older brother, Liam, at AT&T Stadium in Arlington, Texas.

There are levels, and I think Canelo is a level above Smith, but it would be a very good fight, not like the mismatch of Fielding.

I believe that is a typo and was meant to say Canelo is better at 160 than he is at 168. At least that's what I gather from the content in the article.

Canelo certainly has a big speed advantage at 168. But the Fielding fight showed us that he is very undersized.

ADD COMMENT VIEW COMMENTS (9)
Advertisement
Top Headlines Alex Saucedo vs. Arnold Barboza Jr. To Co-Headline Lomachenko-Lopez On 10/17 Erickson Lubin: You Could See How Much I've Changed Since The Charlo Fight Jaron Ennis: I Might Have To Get Into A Mandatory Position To Get A Title Shot Ajagba: Time Away From Ring Was Frustrating, Hurts To Not Be Able To Do Something You Love Nyambayar: I Had A Sprained Ankle Against Gary Russell; I'd Love A Rematch Lubin: I'm Fresher, Hungrier Than Lara & Trout; Looking To Make Statement Against Gausha Pedraza: I Think Lomachenko Will Dominate Lopez, But He Can't Get Reckless Daily Bread Mailbag: Charlo Brothers, Ennis, Canelo, Spinks, More BoxingScene.com's Television Pick of The Week - September 19 McKenna: Beating Ohara Davies Will Be Highlight of My Career Joe Joyce: We'll See if Dubois Can Take My Heavy, Powerful Shots! Frank Warren: Whyte Received Shorter Medical Suspension Than Spelman? Francis Chua Aims To Fight, Looks To Kambosos, NG, MacKenzie Boxing Facing Financial Adjustments Johnny Nelson Confident Whyte Would Have Benefited With Tibbs in Corner Vijender Singh Hopes To Resume Career Before Year is Over Josh Taylor Must Remain Focused on Khongsong, Says Ben Davison Javier Molina: Pedraza Looked Good With LesPierre - I'm No LesPierre! Amir Khan Appointed as President of WBC Middle East Boxing Council Ajagba vs. Rice, Ramirez vs. Caraballo - Ready To Fight Jose Pedraza, Javier Molina - Set For Showdown in Las Vegas Pedraza-Molina ESPN+ Weigh-In Report From The Bubble Ennis vs. Abreu, Nyambayar vs. Breedy - Set For Bouts Erickson Lubin, Terrell Gausha - Ready For WBC Eliminator Haven Brady Jr. Inks Promotional With Top Rank Crawford vs. Brook Negotiations at Advanced Stage For November 14 Zhang Zhilei Inks Promotional Pact With Eddie Hearn Juan Carlos Abreu Comes In 3-Plus Pounds Overweight For Jaron Ennis Fight Rene Tellez-Giron Return Pushed Back Due To COVID-19 Terrell Gausha: I Was Nervous That I Wouldn't Get This Fight Again Teofimo Lopez: Lomachenko Is On His Way Out, I'm Looking Through Him Jermell Charlo: I Don't Want Judges To Make Decision For Me Against Rosario Hearn on Yarde-Buatsi: It's a Massive Box Office Fight at The O2 Abreu: Either Jaron Ennis Knocks Me Out Or I Will Knock Him Out Bilal Fawaz Inks Agreement With MTK Global Lewis Ritson Vows To Fight His Way To a WBA Title Shot Fury vs. Joshua: Hearn Says Deal On The Verge of Being Put on Paper Graveyard Shifts At Warehouse Motivated Molina To Turn Around Boxing Career News: Alejandro Santiago, Faust, Demirezen, Tarimo vs. Fleming Josh Taylor: Me vs. Jose Ramirez is One of The Biggest Fights in Boxing
Advertisement
Latest Boxing Videos 'The Journey - Charlo Doubleheader' 30 Minute Special Showtime Releases Trailer For Documentary 'Ringside' Charles Martin Reacts To Helenius Stopping Kownacki Robert Helenius Reacts To Shocking TKO of Kownacki Adam Kownacki Reacts To TKO Defeat To Helenius Joseph Parker Reflects on Fury-Wilder, Talks Return Mikey Garcia Reflects on Fury-Wilder, Talks Vargas Eddie Hearn Reflects on Fury Stopping Wilder, More Kenny Porter Reacts To Tyson Fury Stopping Wilder Jose Ramirez Reacts To Tyson Fury Stopping Wilder
Recent Top Stories Graveyard Shifts At Warehouse Motivated Molina To Turn Around Boxing Career Erickson Lubin vs. Terrell Gausha: The Play-In Derevyanchenko Vows: I'm Ready For Everything in Charlo Fight Remembering "The Showdown" – Still a Thrill After 39 Years
Advertisement
Latest Forum Threads
Advertisement
Advertisement
This website may contain adult language.
TM & © 2020 BoxingScene. All Rights Reserved.