Vincent Feigenbutz (31-2, 28 KOs) came face to face with Caleb Plant (19-0, 11 KOs) at the official weigh-in ahead of their IBF Super Middleweight World title fight this Saturday night at the Bridgestone Arena in Nashville, Tennessee. (photos by Stephanie Trapp)

At the lively final press conference, both champion and challenger refused to back down from the face off and despite the best efforts of lightweight Diego Magdaleno to intervene, the two headline acts continued to square off until they were finally separated following an intense stare-down. 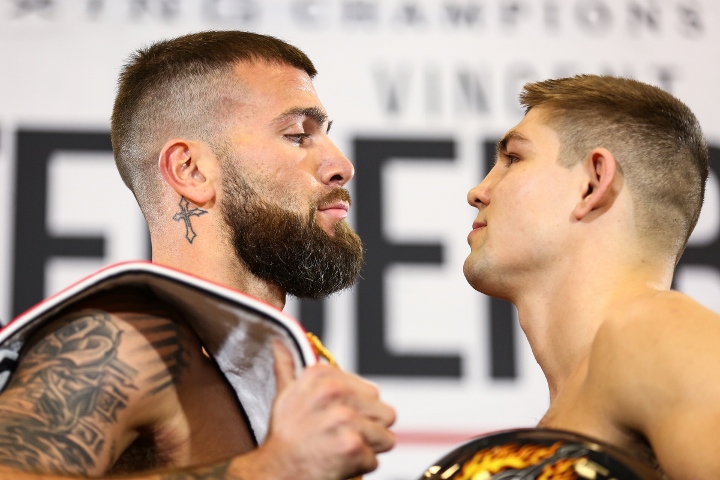 24-year-old Feigenbutz, who achieved his mandatory status with the IBF following ten consecutive victories with nine of them coming via way of knockout, made it clear he was not fazed about facing Plant in the American’s backyard.

Plant, who won the IBF World title with a points victory over Jose Uzcategui, is looking forward to realising his lifetime dream of fighting in Nashville having been raised in nearby Ashland City.

[QUOTE=Letmaku;20393073]Vincent should go down to 160 pounds to be competitive![/QUOTE] Not sure he’d make any impact there either Still trying to figure out how he got to be the mando for tonight’s fight

Vincent should go down to 160 pounds to be competitive!