Caleb Plant captured the IBF super middleweight championship in January 2019 when he defeated Jose Uzcategui. He’s since made two successful defenses of his title, scoring a TKO win over Mike Lee last June and a TKO win over Vincent Feigenbutz in February.

Alvarez has fought only once as a super middleweight, easily demolishing Rocky Fielding in 2018. Alvarez is now looking to make a mark in the division with his next fight, which was initially set to take place against Saunders before Covid-19 halted boxing action globally. 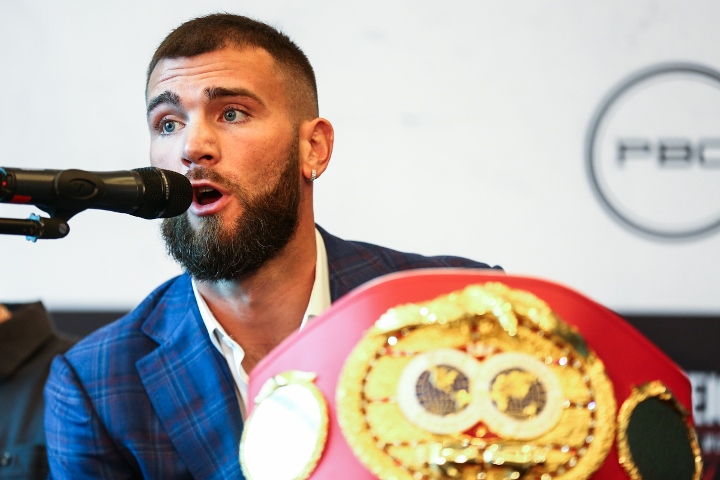 The 27-year-old Tennessee native and current Las Vegas resident Plant was targeted as a potential Alvarez opponent in February, but Plant passed because he would have to endure yet another physically taxing camp in the fight of his life, shortly after he beat Feigenbutz.

With ample time to prepare, Plant said he will give Alvarez the fight of his life.

“I feel that I am the best 168 pound champion that there is. I am the most well rounded. I have the best boxing IQ. I have all of the tools to beat every champion. All of them are good at this and that, but they can’t make the adjustments that I can,”  Plant told BoxingScene.com in an interview.

Plant is looking to reignite conversations with Team Alvarez to prove who truly is the best super middleweight in the world.

“I want a unification match,” said Plant. “I’m not doing any catchweights or 10-round fights. I’m a world champion, 12-round fighter who will fight in my weight class at 168. I’m 13 pounds away from weight right now. I’m in shape. I’ve been running. The only thing that I haven’t been doing is sparring because we have a pandemic on our hands.”

Alvarez or Red Flag would destroy u

Calum, even if he did struggle is the “peak” of that mountain right now. Love Plant and he’s easily the sharpest of Callum and Benavidez but he already pulled his “I need more time” stunt against small ass weight hopping…

There's no question that Smith was very lucky to get the nod over Ryder & that has effected his credibility massively. However he doe's hold the Ring magazine belt, which is of course the #1 prize in the sport. Therefore…

is that the dude who beat the subway sanwich guy .......lol...lol and now he controls the 168 pound divison sorry about it runs thourg him what a f-ing joke.

Canelo is the man until proven otherwise. That said the biggest fight that can be made is Plant vs Canelo. Plant got great ratings against Uzcategui and Canelo is the biggest star in the sport by far.