The undefeated Plant floored Lee once in the first round and twice in the third round, when he knocked out the previously unbeaten Lee on Saturday. Referee Robert Byrd stopped their scheduled 12-round, 168-pound championship match at 1:29 of the third round on the Manny Pacquiao-Keith Thurman undercard at MGM Grand Garden Arena. 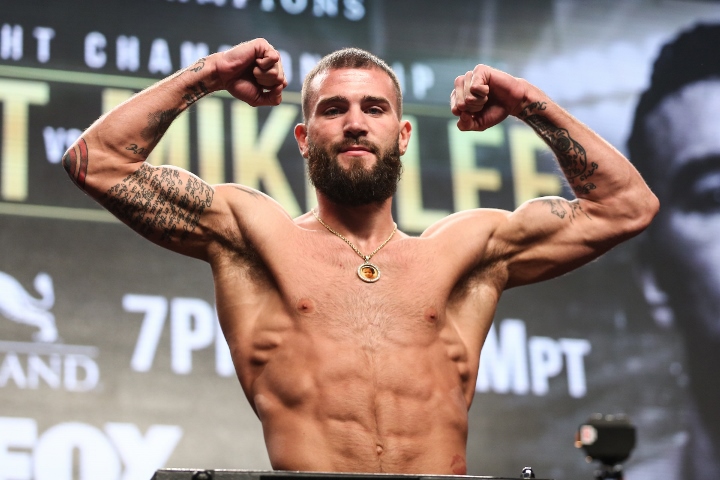 The 27-year-old Plant (19-0, 11 KOs), of Ashland City, Tennessee, made the first defense of his IBF super middleweight title.

The 32-year-old Lee lost for the first time as a pro (21-1, 11 KOs), against an opponent who was a significant step up in competition from his first 21 professional opponents. Lee, a Notre Dame graduate from Wheaton, Illinois, moved down from light heavyweight to challenge Plant and fought at the super middleweight limit for the first time since he turned pro in May 2010.

“It went exactly how I planned it would go,” Plant said. “Absolutely. I’ve been you all week it wasn’t gonna go 12 rounds, and I stuck to my word and I tried to do that. I hope you guys had a good time.

“I tip my hat to Mike because it takes a true champion to step between these ropes. But it’s, ‘And still,’ just like I predicted.”

An overhand right by Plant sent Lee to canvas 31 seconds into the third round. Lee reached his feet, but Plant hit him with a left hook that sent Lee to the canvas again.

Byrd ruled that knockdown a push by Plant, whose punch partially was blocked by Lee’s right glove. It didn’t take much longer, though, for Plant to send Lee to the canvas again, this time with a right hand to the side of Lee’s head.

Byrd waved an end to the fight as Lee attempted to get up again. A frustrated Lee vehemently protested the stoppage, yet after the fight said he understood Byrd’s decision and had no issue with it.

After dropping Lee during the first round, Plant landed an array of shots to Lee’s head and body throughout the second round. A hard right to the body by Plant late in the second made Lee implore Plant to keep coming.

A left hook by Plant knocked an off-balance Lee to the seat of his trunks with 37 seconds remaining in the first round. Lee quickly got up and tried to trade with Plant, who appeared to buzz Lee with a right hand before the first round ended.

“The speed was the difference,” Lee said. “He’s fast and very accurate. I had some success with my right hands, but wasn’t able to be consistent with it.”

168 is looking good. You have Plant, Smith & Benavidez. Some bad dudes!

Very happy for my fellow Tennessean!! WAR PLANT! I think he'll be a force in the division for a long while.

[QUOTE=ceylon mooney;19917219]easy does it my man— he out worked outboxed and outfought uzcategui, and uzcategui is damn good.[/QUOTE] This is true. Uzi is a damn good boxer.

[QUOTE=DaBeastO;19917237]you always talking about these bets you win. I think you bull ****ting[/QUOTE] You can always step up and take them. But as always you won’t! Let’s start with this one. I bet Canelo fights a higher ranked a much…

[QUOTE=Corelone;19917605]Why ask? You just have to rattle the cage or what? Caleb is good, but it's a combination of things. He boxes and bangs and as long as they let him think, he'll do that too. Benevidez is the answer…