LOS ANGELES – It was brains and athleticism over brawn and aggression.

Caleb Plant used his superior skills and two knockdowns to overcome the determination of Jose Uzcategui and take the Venezuelan’s IBF super middleweight belt by a unanimous decision Sunday at Microsoft Theater at L.A. LIVE.

Plant (18-0, 10 knockouts) dominated the first half of the fight with his hand and foot speed, as well as his boxing acumen.

Uzcategui, defending for the first time, fought with the aggression for which he is known but Plant simply wasn’t there to be hit. The challenger bobbed and weaved to avoid punches or held Uzcategui when he got too close, anything to defuse his opponent’s rushes.

The champion never stopped charging but he looked confused, as if he had no idea how to slow Plant down enough to do any damage.

Meanwhile, Plant was able to land enough punches himself to add to Uzcategui’s predicament. He both countered Uzcategui’s punches and fired first, usually behind his jab, when the opportunities presented themselves.

And neither fighter will forget two particular punches. Plant landed a short left hook in the second round that seemed to catch Uzcategui off balance and put him down, although he wasn’t hurt. 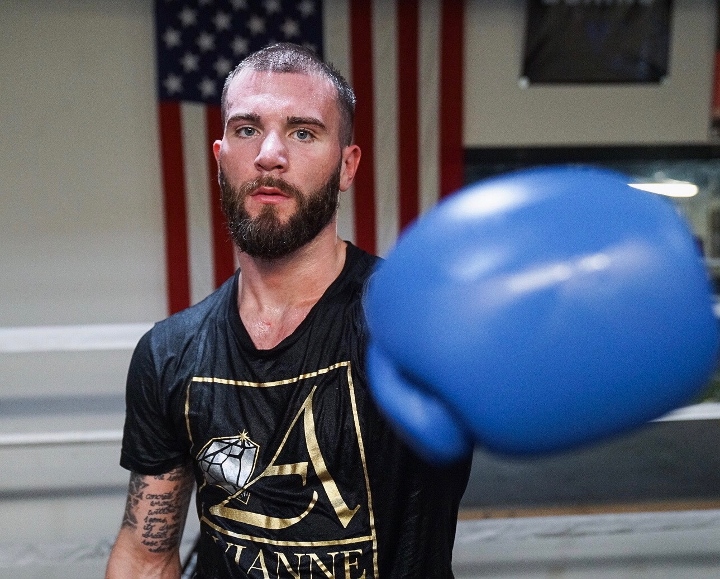 Then, in the fourth, another left found Uzcategui’s chin and sent him backpedaling and onto the canvas.

Plant couldn’t have done much better in the first five rounds, short of a knockout. He won all five on all cards, meaning he led by seven points when the knockdowns were factored in. That put Uzcategui in an enormous hole.

"I knew I caught him clean during those knockdowns, but I knew he wasn't all the way out so I took my time,” Plant said. “I stayed relaxed, I stuck to the game plan and got it done just like I said I would.”

Nonetheless, the champion wasn’t going to give up his belt without a fight. Uzcategui began to close the distance on the challenger in Round 6, when he seemed to fight with added urgency.

Suddenly Plant couldn’t dance away as easily as he had in the first five rounds. Suddenly Uzcategui began landed punches with some consistency, which turned an apparent rout into a competitive fight. Uzcategui outscored Plant on all cards from Rounds 6 to 12.

It was too little, too late, though. Uzcategui couldn’t dig himself out of the hole unless he dominated Plant the way he was dominated in first five rounds or score a knockout. He could do neither.

While Plant was more vulnerable in the second half of the fight, he never seemed to be in danger of being stopped. One moment stood out. Uzcategui caught Plant with a big right early in Round 10 – a punch that might’ve hurt other fighters – but Plant didn’t even flinch.

Several writers on press row said the same thing in reaction: “Damn, he has a good chin.”

When the bell sounded to end the fight, there seemed to be little doubt that Plant would emerge victorious in his first shot at a major world title and that Uzcategui’s reign as champion would be short.

“I did feel that I had the advantage heading into the fight,” Uzcategui said. “I went down because I was off balance, but I wasn’t hurt. He started to get tired around the sixth round, which was the plan. Caleb knew how to clench and hold. He was smart. He knew how to stay away from the punches.

“I expected more movement and more boxing out of him. I would love the rematch. I think everyone saw a great fight tonight. I gave him the chance at the title, and I would hope he would give me the chance to win it back.”

Plant was motivated in part by the passing of his 19-month-old daughter Alia, who died in January 2015 as the result of a rare medical condition that caused incessant seizures.

“I’ve worked my whole entire life for this,” Plant said in the ring immediately after his hand was raised. “Boxing 17 hard years. I buried my daughter in the process of trying to get this belt. I promised I would bring her this title.”

He added shortly afterward: "This is overwhelming. I am a kid who came from nothing. I believed in myself, and now I've been crowned king.

Uzcategui (28-3, 23 KOs) fought Andre Dirrell for the “interim” IBF title in May 2017 but was disqualified for hitting after the bell. He then stopped Dirrell the following March to win the title and became full champion when James DeGale gave up his championship.

Uzcategui was scheduled to defend his title against Plant this past September but the fight was postponed when Plant fractured his left hand in training, which required surgery and extensive rehabilitation.

That was an agonizing fate for a young fighter who had a dreamed of challenging for a championship since he took up the sport as a boy.

It was worth the wait for Plant, who is now a champion and major player in the division. What might be next for him?

"Right now I am not thinking ahead,” he said. “I just want to embrace this moment and soak it in."

[QUOTE=Holler;19432701]It did! I was impressed with Caleb's jab. It definitely gave Uzcat pause for thought as he tried to close. I thought it was a great show. Plant made Uzcat look a very ordinairy fighter at times with his capacity…

[QUOTE=theface07;19428869]True and it may backfire. Plant has bulked up and worked more on power than in previous camps because he knows his footwork and head movement will not be enough on their own to keep Uzcategui back. He's been working…

Plant would be a good 168 debut for GGG and if he wins, him and Canelo can rematch at that weight lol

[QUOTE=HeadBodyBodyBody;19431526]Plant boxed very well, that's for sure, just some semblance of a gameplan from Uz's team would've been nice[/QUOTE] He's a pressure fighter. That was their plan and it didn't work.

Jose a great fighter but he ain’t got the skill and speed of Plant. In a rematch Plant gone do the damn thing again. He slowed down some but that be his first 12 round fight and not to mention…