NASHVILLE—It will take a lot of convincing for Caleb Plant to believe any super middleweight in the world today is on his level.

His greatest challenge, the unbeaten defending titlist believes, has been right alongside him for the past four years.

“Jordan and I, we really motivate each other to always do better,” Plant (19-0, 11KOs) told BoxingScene.com of the competitive drive that exists between himself and Jordan Plant (nee Hardy), whom he married last October. “It’s a beautiful thing, but—we never fight about anything in life, but our only arguments are about who’s doing better at the moment. We are both VERY competitive.”

It’s been a rewarding journey from when the two met in 2016, having grown to become boxing’s power couple as both enjoy successful careers in the sport. Jordan Plant will have the night off from her duties as Fox Sports ringside reporter, a role she abandons to avoid conflict whenever her husband is in the ring. Such is the case this weekend, as Caleb Plant faces Germany’s Vincent Feigenbutz (31-2, 28KOs) this Saturday atop a Premier Boxing Champions (PBC on Fox) tripleheader from Bridgestone Arena in Nashville, Tennessee. 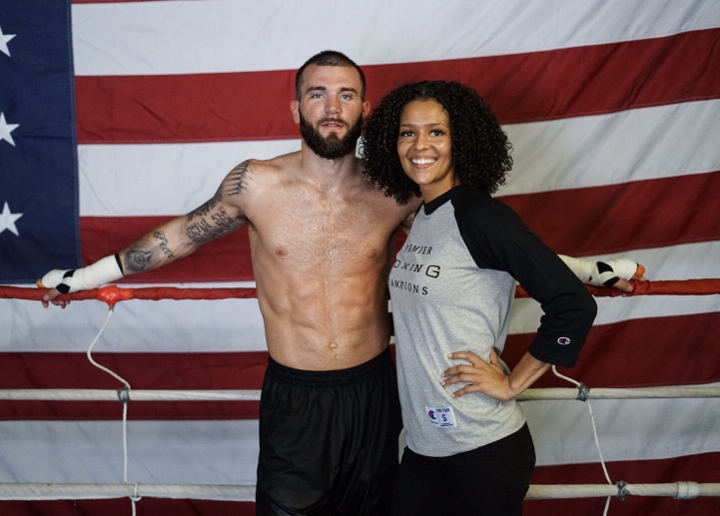 The event marks Plant’s first-ever fight in his home state, though the 27-year old from Ashland City has always set his career goals much higher than it ending with a homecoming headliner. Even long before his win over Jose Uzcategui to claim his belt last January—an achievement which was immediately followed by a wedding proposal to Jordan—came the desire to continue to carve out a name for himself in the sport.

It’s a vision of which he never lost sight, but one which became much clearer in 2016 when a PBC intern met a rising middleweight prospect.

“That’s definitely the biggest change we’ve experienced since we’ve been together, just how much we’ve both grown since then,” notes Jordan Plant, who attended UNLV on a full ride scholarship for the 100-meter hurdles and graduated in 2014 with a Bachelor’s degree in broadcast journalism. “When we first met, I was just taking photos for PBC as an intern. Caleb was still as prospect.

“Now here I am, working with Fox Sports and just worked a Pay-Per-View (Deontay Wilder’s repeat knockout of Luis Ortiz last November) and he’s a defending world champion. The growth is everything.”

Caleb Plant was preparing for his 12th pro fight at the time he met the woman who would forever change his life. He was still living in Ashland City and training out of Music City Boxing gym in Nashville at the time of his January 2016 clash with Adasat Rodriguez. The bout was scheduled just shy of one year to the day of the passing of his daughter Alia, who died on January 29, 2015. Alia spent every day from her May 2013 birth battling Aicar Transformylase Imp Cyclohydrolase Deficiency, a rare disease for which there doesn’t exist a known cure.

Plant’s promise to his daughter was that he would one day bring her home a world title. That dream was accomplished last January, with the previous three years to that point fueled by another driving force in his life. It was love at first sight with Jordan, both confident they were the perfect complement to the goals each had in their respective career paths and life in general.

“Even way past all the competitive stuff, what she’s really helped me accomplish the most—something I could’ve never done without her—is relaxing a little bit, calming down more,” admits Caleb. “When it comes to the boxing side, I will always be more outspoken. But outside the ring ever since meeting Jordan, I’ve become more calm and reserved. She’s helped me just calm down and not always be on edge.”

In the four years that have passed have come Caleb Plant’s rise from unbeaten yet relatively unknown prospect from Tennessee, to relocating to Las Vegas and now serving as among the best in a wide open super middleweight division. Right alongside that run has come his newlywed’s trajectory from Jordan Hardy the intern photographer to Jordan Plant the ringside reporter for the PBC on FS1 series.

Both saw next level success in 2019, Caleb winning and defending his super middleweight title and Jordan earning a spot on the broadcast team for a Fox Sports PPV event last November. Neither ever had any doubt that the other would reach that point, just a matter of who claims bragging rights in their Las Vegas home.

“We’re talking about not just a beautiful and intelligent woman, but a gifted athlete who went to college on a full ride to run 100m hurdles,” notes Caleb, always well aware of the competition level, no matter the medium. “Then of course you got myself, a world champion. So if we argue, it’s just about who has the edge at the moment. “I’m doing better than you,” “No you’re not, I’m ahead.” But it’s playful while we push each other. You know, iron sharpens iron. She’ll kill it on a show, and I’m like, ‘Damn, now I gotta step it up and do my thing.’ So once I defend my world title this weekend, then she’ll tell me she has to step up her game.”

For this weekend, Jordan gets to sit back and enjoy the view—at least as much as her competitive edge will allow. She remains Caleb’s biggest supporter whether in the gym, on fight night or serving as hype person to introduce Team Plant’s arrival onto any given scene.

It does come with an ulterior motive—his next big achievement raises the bar for her to surpass the next time she’s behind the mic.

“It’s a beautiful thing, though. We had these goals together and we keeping rising to the top together,” note Caleb. “So now it’s just about continuing to push each other to the next level through our actions.”

Interestingly, the easiest transition in their four years has been that from boyfriend and girlfriend to husband and wife.

“The only thing that’s really changed in the (four months) since we’ve been married is my last name, and saying that I have a husband,” notes Jordan. “We’ve always been each other’s best friend, so nothing is really different.”

Nothing other than their place as boxing’s ultimate power couple, of course.

Caleb is a great guy and will soon whup Benavidez and become a star.

I like Plant, he has come through awful personal issues and deserves some peace and contentment in his life.

Shocked at how positive this thread is lol. Doesn't feel like I'm on boxingscene but good see some nice comments for a change on here.

She looks like the young dominican girls in my street, Im glad Caleb is married now.

I’ve met Caleb Plant early in his career since my good friend manages him. He’s always been a class act and cool person before and I’m glad he’s been the same and hasn’t change. He told me he was going…