Bryant Jennings: I Made Adjustments, Got The Job Done

Bryant “B.Y.” Jennings’ climb up the heavyweight ladder continued, as the Philadelphia native got up off the deck to knock out Alexander “Sascha” Dimitrenko to win the vacant IBF International and NABO heavyweight titles in front of 2,543 fans at Ocean Resort Casino’s Ovation Hall.

Jennings (24-2, 14 KOs) was knocked down with a big right hand in the fourth round, but rebounded to knock down Dimitrenko (41-4, 26 KOs) twice in the eighth round. An uppercut in the ninth round sent Dimitrenko to the canvas again, and referee Allen Huggins immediately called a halt to the contest, much to Dimitrenko's chagrin.

"I was prepared for a tough 12 rounds," Jennings said. "I did what I had to do. I was in great shape. He's a big dude. He's not as slow as I thought. I made adjustments, and I got the job done."

Said Dimitrenko: "I wanted to continue the fight. I don't know why the referee stopped it." 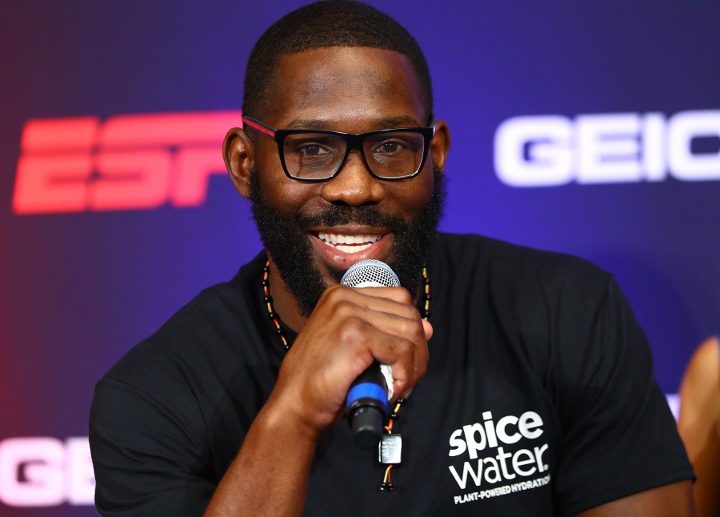 “I was looking for {the knockout}, but it didn’t come,” Carto said. “Next time, I need to set shots up instead of loading up on one big one.”

I think that baby-faced Dimi looked verry big and strong for that fight, he prepared to knock Jennings out and almost did it. He lost but he did mutch better than i thought. He seemd to be more heyvy-handed than…

Entertaining fight. I probably enjoyed it more because I had such low expectations going in. Figured Sascha would fold fairly easily but after he dropped Jennings he gained confidence and was ripping some very hard shots on Jennings. Dimitrenko started…

[QUOTE=JakeTheBoxer;19032174]Again, give Jennings to Joe Joyce. Dude wants a fight with ex contender.[/QUOTE] Joyce is like 40 with just a small handful of pro fights. Bryant guys him like a fish

Again, give Jennings to Joe Joyce. Dude wants a fight with ex contender.