Bryant Jennings Gets Off The Floor To Stop Dimitrenko in Nine

ATLANTIC CITY – Bryant Jennings was well on his way to emphatically knocking out Alexander Dimitrenko on Saturday night.

The heavyweight contender from Philadelphia dropped Dimitrenko for the third time when he cracked Dimitrenko with a right uppercut that knocked him down during the ninth round. Before Jennings could cleanly finish off his huge Russian opponent, referee Alan Huggins stopped their scheduled 12-round fight at Ocean Casino Resort.

Huggins was waving an end to the fight as Dimitrenko was falling to the canvas, without seeing how he responded to the knockdown. Dimitrenko got right up and disputed Huggins’ decision to the stop their fight. 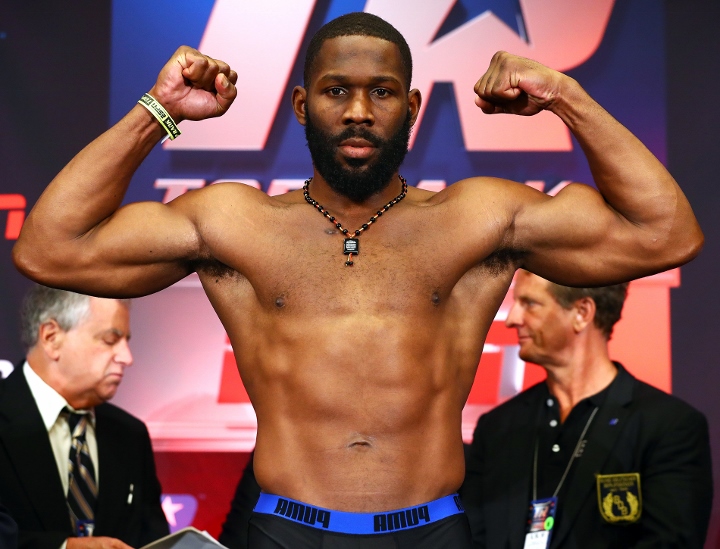 The time of the stoppage was 1:56 of the ninth round. Huggins said following the fight that he stopped the it immediately after the third knockdown because he was concerned Dimitrenko would get seriously injured if the fight continued.

Despite the seemingly premature stoppage, Philadelphia’s Jennings (24-2, 14 KOs) showed tremendous resolve by overcoming a fourth-round knockdown. The well-conditioned Jennings came back to drop Dimitrenko (41-4, 26 KOs) with a left hook in the eighth round, scored a questionable knockdown later in the eighth and floored him again with the aforementioned right uppercut in the ninth round.

Jennings, who gave away five inches and 22 pounds, is now 5-0 since resuming his career a year ago. He didn’t fight for 20 months after Luis Ortiz stopped Jennings in the seventh round of their December 2015 fight in Verona, New York.

The 33-year-old Jennings has lost only to Ortiz (29-1, 25 KOs, 2 NC) and Wladimir Klitschko (64-5, 53 KOs), who defeated Jennings by unanimous decision in their fight for Klitschko’s IBF, IBO, WBA and WBO titles in April 2015 at Madison Square Garden.

The 36-year-old Dimitrenko was the most proven opponent the 6-feet-2, 225-pound Jennings has fought since ending that long layoff. The 6-feet-7, 256-pound Russian had lost only to former WBO champ Joseph Parker (24-2, 18 KOs), longtime contender Kubrat Pulev (25-1, 13 KOs) and onetime contender Eddie Chambers (42-5, 23 KOs) before Jennings defeated him.

Before flooring Dimitrenko again in the ninth round, Jennings lunged in and connected with a left hook that dropped Dimitrenko almost exactly at the midway mark of the eighth round. Dimitrenko made it to his feet, but went down again with about 55 seconds to go in the eighth.

A push appeared to cause his second trip to the canvas in the eighth, but Huggins counted it as a knockdown. Dimitrenko got up again and survived until the end of the eighth round.

Jennings’ left landed early in the seventh round, but Dimitrenko fired right back with a right hand that made Jennings retreat. Jennings landed a left hook and then a stiff jab just before the seventh round ended.

A right uppercut by Jennings backed up Dimitrenko with about 45 seconds remaining in the sixth round. Jennings followed that up with a right hand to the side of Dimitrenko’s head that forced him to hold.

Jennings was controlling the distance and effectively using his jab before Dimitrenko dropped him with an overhand right to the side of his head with just over two minutes to go in the fourth round. A stunned Jennings shook his head, regained his senses, got up and prevented Dimitrenko from hurting him again in the fourth round.

Jennings lunged and landed a short left hook that made Dimitrenko hold him with about two minutes left in the third round. An overhand right by Jennings landed from the inside with about 1:15 to go in the third.

Jennings’ jab became an effective weapon by the second round, when he landed it several times.

[QUOTE=E-Thug;19032865]NO IT ISN'T STOP LYING!! The fight we BOTH need to see my man is … Shannon Briggs VS Dereck Chisora. Holy motherf[COLOR="Black"]uc[/COLOR]k. That would be special.[/QUOTE] I raise you: Cannon Briggs v Doncaster Delahoya Co main: Delboy the British…

It's no coincidence that Dimi finds himself in these kinds of situations all too regularly.

[QUOTE=BigZ44;19031719]With all my heart and soul, more than any other fight in boxing, I NEED to see Dimitrenko vs David Price[/QUOTE] NO IT ISN'T STOP LYING!! The fight we BOTH need to see my man is … Shannon Briggs VS…

just watched it, lol @ dimentrenko trying to sound like vitali vs lewis with him shouting 'no' 'bull****' like he wouldnt of quit literally seconds later :lol1: anyone know why lennox was cheeleading jennings, that was kinda weird..