Brook: I Applaud Crawford For Taking The Fight, He'll Be in There With a Monster!

Former IBF welterweight champion Kell Brook, 34-years-old, has given high praise to Terence Crawford for agreeing to face him.

Brook will challenge Crawford for the WBO welterweight title on November 14th, likely at the MGM Grand's Conference Center in Las Vegas. 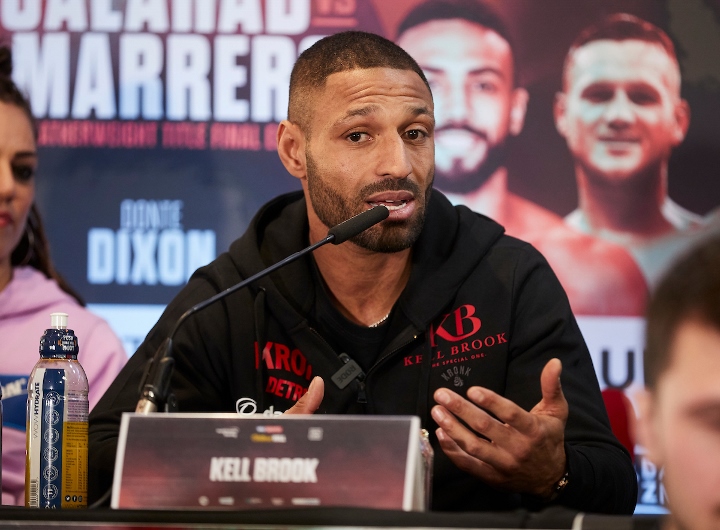 The Sheffield boxer has now aligned himself with trainer Carlos Formento. He's unable to use regular trainer Dominic Ingle because of the coronavirus pandemic.

Brook became a fan of Formento after following him on social media.

"He's a guy I followed on Instagram because I like his style," said Brook to the BBC.

"I had never worked with him previously because Dominic is my trainer number one. I messaged him on Instagram and basically said 'let's work together.' The first day, I knew that we gelled unbelievably. He is basically obsessed. He is passionate. And that's everything I need in this fight."

Brook was in the ring back in February, when he knocked out Mark DeLuca in seven rounds.

The contest is the first for Brook at the welterweight since 2017, when he was stopped by Errol Spence.

During that period, Brook had suffered back to back stoppage defeats to Spence and Gennady Golovkin. He suffered fractured orbital bones in both bouts - which required surgery in both instances.

Despite the odds being stacked against him, Brook believes that he can topple the boxer that man regard as one of the best pound-for-pound fighters in the world.

"I've got to applaud Terence Crawford for taking this fight, because he is in there with a monster with self-belief," Brook said.

"He is one hell of a fighter but a smaller man naturally to me. I'm a dangerous man, a big welterweight and a force to be reckoned with. Everybody has been writing me off. I'm going against everyone. This fight is for me. Nobody else bar me."

This fight should be 152 catchweight. but fck it im bettin on Brook

Crawford’s best wins at welterweight and maybe his entire career are Horn, khan and Benavidez. Hardly even close to being in the top 10. Why Crawford signed with Top Rank and not PBC when he knows the brand name fighters…

[QUOTE=lopetego;20842481]Agree. Crawford is a fraud and he's doing his cherrypicking again. Brook is a washed up hasbeen just like Khan I hope Brook somehow pulls the upset, Crawford is the most overrated guy in boxing someone being called P4P king…

[QUOTE=Roberto Vasquez;20842164] I feel like Crawford picks 'big' names from the previous era with low risk.[/QUOTE] crawford has always been a cherrypicking coward. who avoids punchers. didnt this clown get knocked out cold with a broken jaw from damn gary…

Is Kell bringing a lion or the loch ness monster to let into the ring after he gets his ass beat or something?