Adrien Broner hasn’t been able to win a fight decisively since he stopped Ashley Theophane two years ago.

That marked the third straight Broner bout that attracted a peak audience of at least 859,000 viewers for Showtime. 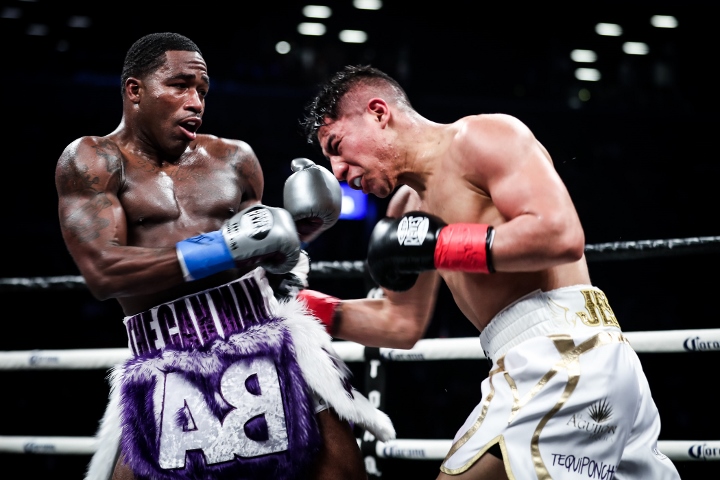 Immediately before the main event between Broner and Vargas on Saturday night, a peak audience of 572,000 watched Jermall Charlo knock out Hugo Centeno Jr. in the second round. The Charlo-Centeno contest was watched by an average of 545,000 viewers.

Charlo knocked Centeno flat on his back with a crushing left hook and Centeno couldn’t get up. Houston’s Charlo (27-0, 21 KOs) won the WBC interim middleweight title by beating Centeno (26-2, 14 KOs, 1 NC), of Oxnard, California.

EDITOR’S NOTE: The original version of this story posted noted that the peak viewership during the Broner-Vargas main event was 869,000 viewers. That was the peak audience during the actual bout. Viewership went up to 891,000 just before the decision was announced.

[QUOTE=Motorcity Cobra;18703317]I think he meant Rodney King[/QUOTE] I agree, that makes more sense. Just that AB should know those are two Kings you really don’t want to confuse.

[QUOTE=Sid-Knee;18703369]Your resume is what you did do, not what you didn't. Anyone can lose.[/QUOTE] I think your resume is your wins and losses. They both factor in. Broner’s losses outweigh his wins imo which is why I don’t consider him…

[QUOTE=Randall Cunning;18702442]Every single time theres one of these threads people are going on about whats on the over channel, someone will find something. "Joshua only sold 1mil PPVs, X Factor was on the other channel"[/QUOTE] Haha, that's what I was…

[QUOTE=The Big Dunn;18702417]what? Broner's resume is solid as it gets. He's fought good comp at the lower weights and tough guys as he moved up. Now we can argue if he didn't get some favorable scores from judges, but he…