Broner: Pacquiao is a Black Fighter - F***ed Up Money & Taxes!

BEVERLY HILLS, Calif. – The question with Adrien Broner is, how low will he go? The answer: pretty low. That includes racist jokes, including some directed at his own ethnic group.

Broner was speaking at the formal portion of a news conference to promote his January 19  pay-per-view fight with Manny Pacquiao when he served up some of his dicey material to a few hundred in attendance.

“Before beating me, he has a better chance of becoming a driving instructor,” he said, dragging out the racist trope that Asians are poor drivers. The “joke” was greeted with jeers from the crowd, which included many Filipinos. 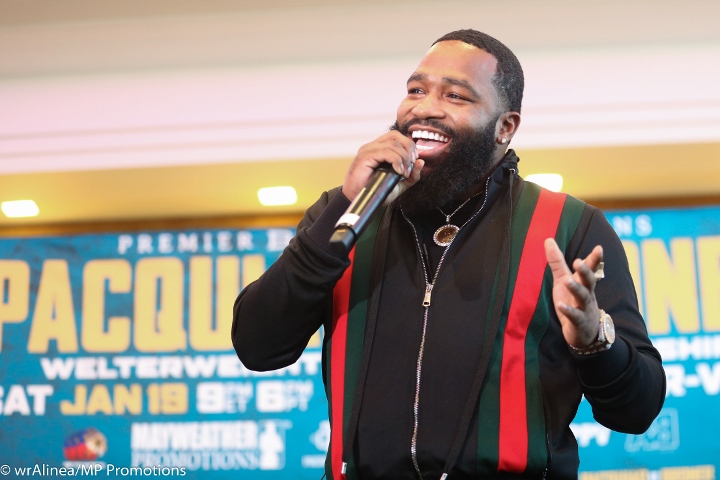 Broner seems to think he has to be outrageous for marketing purposes, saying at an earlier session with reporters that Pacquiao’s “English isn’t that good. All he does is smile and say one word at a time. I gotta sell the fight.”

Pacquiao seems to be amused by Broner, as they laughed together on stage at both the New York and Los Angeles news conferences.

And the eight-division champion let Broner’s ill-advised jokes roll off his shoulders like Floyd Mayweather might avoid a punch. Pacquiao was speaking about the challenge he faces when he said with a grin, “He’s a good boxer, he’s a champion, he’s young, he’s fast … fast with his mouth.”

That comment drew cheers from his supporters at the news conference, one last condemnation of Broner.

Neither fighter had much to say during the formal portion of the news conference, other than typical comments about how tough and action-packed the fight will be when they’re face to face the next time at the MGM Grand in Las Vegas.

Showtime reporter Jim Gray, who asked both fighters a number of questions but didn’t hear anything interesting in response, had the best line of the day when he said: “Hopefully they’ll throw more punches than words.”

[size=3]Deontay the Bronze Bomber Wilder Got them Ancestry Spirits on his side! [/size] [IMG]http://alb1.albtechllc.netdna-cdn.com/wp-content/uploads/2015/09/fist_bump_head4.jpg[/IMG]

What he said was funny, but at the same time, Adrien Broner does come off as a stereotypical buffoon and a coon. He's like a lot of these cornball ass rappers that I cringe when I watch them.

[QUOTE=DARKSEID;19287272]It wasn't funny if you actually saw it lol because after broner said it he acted like he was a 12 year old girl having a siezure. It was the most awkward thing I have ever seen. Edit: here lol…