Broner: I Showed More In Maidana Loss Than In My Wins

Adrien Broner likes to say that he’s the reason for his losses — defeats against Marcos Maidana in 2013 and Shawn Porter in 2015. But he also takes some pride in the way he went down in defeat his decision loss to Maidana.

“I showed more in that fight than in any of my fights that I ever won,” Broner told syndicated radio show The Breakfast Club on Wednesday morning.

"I’m fighting a former Olympian [Maidana was never in the Olympics], a world champion. I’m jumping up two weight classes from 135 to 147 pounds [Broner had stepped up from lightweight six months beforehand to face Paulie Malignaggi. I won a world title, and I fight one of the toughest (expletive) in the weight class." 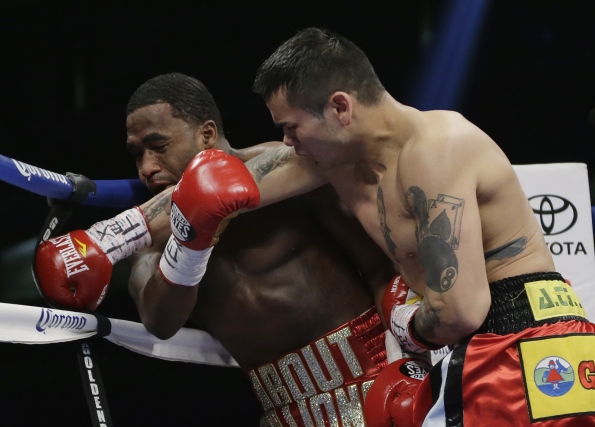 “And then it’s not like I ran. I walked toward him the whole 12 rounds. I got caught with some good shots. I fought him with my heart instead of my brain,” he said. “But guess what, though: Floyd [Mayweather Jr.] fought him, too. And after that fight, they said, ‘Now you fought both of them, would you fight Broner again?’ He said no. He don’t want to fight me again. Point blank, period.”

Maidana hasn’t fought since his rematch loss to Mayweather in 2014 and has gained a significant amount of weight. He hasn’t spoken of any urgent desire to return to boxing in general.

I never liked Broner's "If they Hate me then they'll Pay me" self absorbed personality... Way over the top with that attitude, it was nice to see him humbled against Maidana.. That said, despite Broner's immediate exit after the fight…

[QUOTE=ARENA;16674609]There is not a single round that Broner won clearly.[/QUOTE] I watched the fight again today because of this thread and he did win the 6th really clearly. That's it, though. There were two other rounds I thought he won…

[QUOTE=djt117;16675759]I used to have a love/hate attitude towards Broner but now I kinda like him (despite all that bowling alley business). I'm not sure what it is exactly that changed my mind ... I think for me, he represents a…

BRONER!!!!! The heart of a champion beats in your chest even though you got your a#s kicked. If only Victor Ortiz had a little bit of that heart. Now....get the head of a champion. I don't mean by them damn…

[QUOTE=Cinci Champ;16674180]people may hate broner but he showed a ton of heart in that fight and he actually boxed very well for some rounds. there is no question as well that he won more rounds then he was awarded[/QUOTE] I…