Polish super featherweight Ewa Brodnicka not only talked the talk but also, well, showed the show at a pre-fight weigh-in, first appearing in a highly provocative (read – half-naked) lingerie outfit, then kissing her Argentinean opponent Edith Soledad Matthysse and receiving a slap in return.

On a fight night, however, WBO 130lb champion Brodnicka (18-0, 2 KOs) was also able to walk the walk, as she barely got past the elder sister of Lucas Matthysse with a split decision to retain her title for the fourth time.

The fight was the main event of a huge night of boxing, promoted by Tymex Boxing Promotions at Hala Sportowa in Czestohowa, Poland on Friday, October 4.

Brodnicka, 35, was her usual self, using her reach and height advantage, and working behind her jab and a left hook. Her footwork was her way to the victory, although the aging Argentinean (now 39) was dangerous in close quarters. But Brodnicka didn’t allow her to use the distance to Matthysse’s advantage, finally outpointing and outboxing her, specifically in the closing rounds. Two judges had it for the Pole: 97-93 and 96-94, while the third saw the fight 96-95 – for the Argentinean. 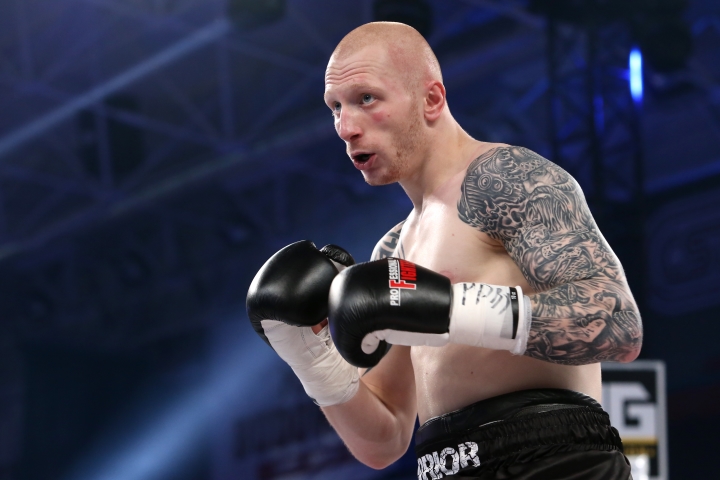 In what was a close fight, Polish super middleweight Robert Parzeczewski scored his 16th consecutive win to further enhance his chances for an eventual top-15 ranking position. Parzeczewski was forced to work through hell against Patrick Mendy (18-15-3, 1 KO) of Gambia, a fighter whose record tragically contradicts his real-life fighting skills.

Mendy was specifically successful in the opening rounds but Parzeczewskiw as able to find his rhythm at the mid-point and dominated his light-hitting opponent physically during the second half of the fight, although the Gambian was as liquid and as game as ever to prevent the Pole from doing any serious damage.

Wierzbicki controlled the first round with his superior technique and flashy southpaw style. He was doing the same through the first minute of the second stanza, until Greene got him bad with a right hook. Down went Wierzbicki. He then got up but was soon under fire. Finally, Greene caught him near the ropes, opened a very bad cut over the Pole’s right eyebrow and unleashed a furious fusillade of punches, which ended only when referee Robert Gortat stepped in as he saw enough of it. Time was 1:42.

Once a promising middleweight prospect Patryk Szymanski erased a part of his bad memories after two consecutive stoppage losses to mediocre opposition, with a bad stripe-breaking win over ethnic German (but representing Moldova) Denis Krieger (14-9-2, 9 KOs). All three judges saw it for the Pole: 80-72, 79-73, and 78-74.

In a rough fight 22-year old super middleweight Sebastian Slusarczyk rallied past fellow countryman Tomasz Gromadzki (10-3-1, 3 KOs) to stop him in the fourth after three relatively even rounds. Slusarczyk is now 6-0, 4 KOs.

On a separate card, staged by Jerzy Mazur of the Wach Boxing Team, heavyweight Mariusz “The Viking” Wach, the banner name of the team, and former world title challenger, destroyed another Georgian cannon fodder Giorgi Tamazashvili (2-6, 2 KOs) in just a round to improve his record to 35-5, 20 KOs. Time was 1:25. Wach, 39, went distance with prime Wladimir Klitschko in November 2012.

This fight wasn’t in California. If it was, everyone would have to take a class on sexual harassment.

...since most on NSB will need visual evidence of what [MENTION=10981]BIGPOPPAPUMP[/MENTION] claims ALLEGEDLY happened... Here you go.