The last leg of the World Boxing Super Series is finally set.

Mairis Briedis and Yuniel Dorticos have waited for months to receive their marching orders for the World Boxing Super Series (WBSS) season two cruiserweight finale, which now has an official date and location. The event will take place March 21 at Arena Riga in Briedis' hometown of Riga, Latvia, tournament brass formally announced on Friday.

“The conclusion of Season 2 of the WBSS is going to be nothing but spectacular,” said Kalle Sauerland, Chief Boxing Officer of the WBSS. “After two epic Ali Trophy finals – Regis Prograis vs Josh Taylor and Naoya Inoue vs Nonito Donaire – it's time to crown the cruiserweight champion of the WBSS.

“As we have become accustomed, whoever raises the Muhammad Ali Trophy at the end will become the man to beat in the division. And as with the other finals, we are very proud to also have the historical Ring Magazine belt on the line in red hot Riga.” 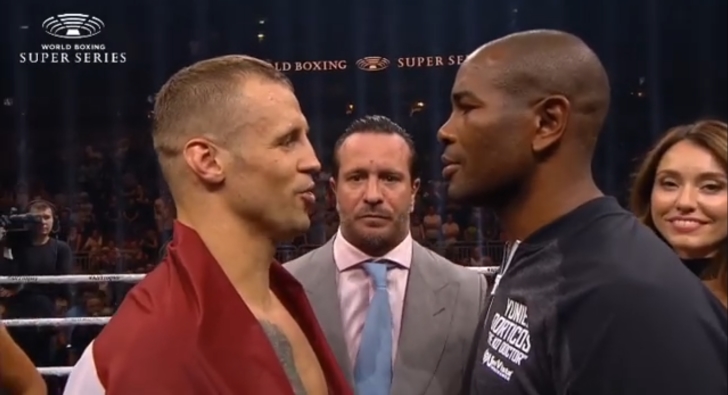 Dorticos (24-1, 22KOs) returned to the championship stage in his win, flattening previously unbeaten Andrew Tabiti in 10 rounds to claim the International Boxing Federation (IBF) title which will be at stake. The highlight reel finish was properly reflected during award season, landing as the BoxingScene.com 2019 Knockout of the Year.

It also pushed the Miami-based Cuban puncher one step further than was the case a year prior, when he was forced to bow out in the semifinal round of the WBSS season one cruiserweight tournament. That setback came at the hands of Murat Gassiev, suffering a 12th round knockout on the road in Russia.

“Briedis, you better prepare yourself for war,” said Dorticos (24-1, 22KOs), who entered season two as the number-two seed. “Let’s give all the fans around the world a spectacular all-time classic.

“Come fight night you will know why I’m called the ‘KO Doctor’. The Muhammad Ali Trophy has my name engraved already!”

Briedis (26-1, 19KOs) entered the tournament as the number-one seed and will enjoy hometown advantage for the second straight fight. The bout to land him in the finals, however, was also the cause for the months-long delay.

Less than an hour after Dorticos punched his way into the final round of the tournament, Briedis believed to have landed as a two-time cruiserweight titlist following a 3rd round knockout of Krzysztof Glowacki in their wild slugfest last June. The bout was mired in controversy, which become the subject of two formal appeals filed with the World Boxing Organization (WBO), whose title Brieidis claimed following the win.

The heart of the protest stemmed from the gross mishandling of a foul-filled round two where referee Robert Byrd failed to properly discipline both fighters, along with allowing the round to last well beyond the three-minute mark, which resulted in Glowacki—whom had been floored just prior to the bell—hitting the deck for a second time a good ten seconds after the true end of the frame.

Briedis was permitted to keep the knockout win on his record, but Glowacki—through his legal team–was successful in leveraging an immediate rematch ordered between the two. Briedis failed to comply with the ruling, vacating the WBO title in the process.

Also a season one semifinalist, the desire to move forward with the tournament took precedence with the now former two-time titlist.

“I’m really looking forward to the final,” said Briedis, whose lone loss came in the season one semifinals to eventual tournament winner Oleksandr Usyk. “It is fantastic for Latvia to be able to host an event of such magnitude. Millions and millions of eyes worldwide will be watching what’s happening at the Arena Riga on fight night.

“It is going to be a thrilling fight as I’m facing one of the very best cruiserweights on the planet. The stake is so high and both of us are only looking for one thing - to win it all!”

The winner will earn tournament honors as the recipient of the Ali Trophy, named after the late, legendary former three-time World heavyweight champion Muhammad Ali. With Usyk now competing in the heavyweight division, a new World [lineal] champion will also be crowned with such recognition to also come from the Transnational Boxing Ratings Board (TBRB) and Ring Magazine.

“The WBSS and Ring Magazine have a common goal; we strive to seek out the best fighter in each weight class," stated Tom Gray, associate editor for Ring Magazine and also a noted historian. "Mairis Briedis and Yuniel Dorticos meet in the WBSS cruiserweight final, and with Aleksandr Usyk having moved north to heavyweight, this bout will decide his heir apparent at 200 pounds. Once again, the Ali Trophy and Ring Magazine titles will be at stake, and fight fans will be treated to boxing at its best.”

As has been the case for all of the WBSS season two bouts, the finale will stream live on DAZN in the United States.

As long as there are no Byrds involved.

Wbss should not have allowed this fight to go to Riga but maybe they had no other options?

Disgraceful this happening in Riga, especially consider what happened in the Semi’s. I like Riga arena, it has a great atmosphere but due to the controversy last time out, this seems a questionable decision to say the least.

Finally. I hardly pay any attention to cruiserweight but I've been wanting to see this at least.

Should have happened already, but good it is atleast happening