Briedis Knocks Glowacki Out in Wild Fight, For WBO Title

Mairis Briedis got it right the second time around—even after nearly blowing it.

Briedis floored Glowacki three times in the condensed bout, ending the fight at 0:27 of round three. 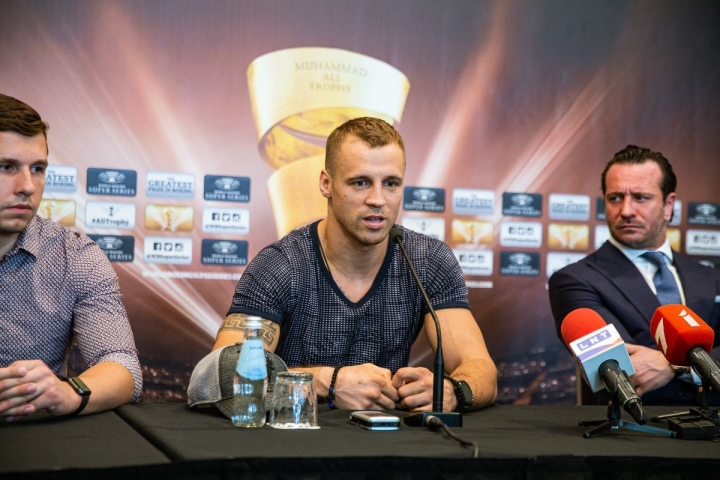 The rabid crowd on hand cheered Brieidis’ every move, although it was Glowacki taking the initiative in the early portion of the contest. Brieidis offered steady lateral movement, hoping to pick apart the Polish southpaw from the outside. It didn’t quite take, as Glowacki remained calm in the pocket.

Action took a bizarre turn in a second round that will be remembered for all of the right and wrong reasons. An exchange on the inside ended with Briedis responding to a Glowacki left hand to the base of his skull by throwing a wild elbow which caught Glowacki on the head and caused him the collapse to the canvas.

“I was hit behind the head,” Briedis said of the sequence. “I’m sorry for how I responded, it’s my old Muay-Thai style.”

Completely lost in the sequence was badly faded referee Robert Byrd, who initially missed the foul and urged Glowacki to get up before catching on to what took place. A point was deducted from Briedis’ tally, although the scorecards woudn’t at all matter.

Briedis came storming back, twice flooring Glowacki in the round. The second of the two came well after the bell repeatedly sounded to end the round, with the timekeeper clanging on the bell to get the attention of Byrd who cluelessly allowed action to continue.

It cost Glowacki another knockdown as Brieidis kept fighting and sent him to the canvas following an assortment of punches which was punctuated by a right hand. Byrd issued a count despite everyone screaming that the round had ended, to which he lectured the ringside officials that he couldn’t hear the bell.

Everyone else certainly did.

“I heard the bell,” stated Briedis, who instead chose to protect himself at all times.

Briedis jumped on the wounded Glowacki in round three, connecting with a temple shot that sent the Polish southpaw crashing to the canvas. This time, the referee saw enough, deeming Glowacki unfit to continue.

It’s sweet redemption for Briedis, who came up short in this very arena one year ago in dropping a competitive decision to Aleksandr Usyk in the season one semifinals. Usyk went on to run the tournament tables, unifying all four major titles and going on to become 2018 Fighter of the Year.

Briedis has since rebounded with three straight wins along with claiming Glowacki's recently awarded World Boxing Organization (WBO) title, although both tournament victories now laced in controversy. He advanced from the quarterfinals round following a widely disputed decision win over Noel Gevor last November, on the same night Glowacki scored a much cleaner victory in a 12-round nod over Maksim Vlasov.

Saturday’s wild affair could find its way to a commission’s desk in the form of a protest.

For now, the victory was rewarding enough for Briedis to drop to a knee and propose to his longtime girlfriend.

Awaiting the Latvian hero in the finals is another redeemed two-time titlist in Yunier Dorticos, who advanced via a spectacular one-punch 10th round knockout of previously unbeaten Andrew Tabiti earlier in the evening.

Dorticos also came up short in the season one semifinals, suffering a 12th round knockout at the hands of Murat Gassiev.

“I said before the fight, may the best man win and the best man won,” Dorticos said of his future rival’s performance. “It was a great victory, now we have a finals between two two-time world champions.”

The matchup will come with at least two major divisional titles at stake; more importantly it will reestablish championship lineage with Usyk and Gassiev now campaigning in the heavyweight division.

“I will return to camp and regroup,” Briedis said of the potential blockbuster matchup. “Thank you to all my fans in Latvia, I did not want to let you down.”

[QUOTE=Enzo Mc is ****;19835308]The fact that Breidis is the better fighter doesn't mean this shouldn't be ruled a NC. Glowacki has the right to a fair chance to win the fight, no matter how unlikely it is. He took an…

Actually circulated youtube video of elbow incident is RIGGED, where audio is shifted so that you would think Glowacki hit the back of the head AFTER the Stop command by referee. But in reality referee called Stop immediately at that…