Briedis: Happy To Resolve Unfinished Business With Glowacki After WBSS

In a way, Mairis Briedis was presented with a good problem.

The former two-time cruiserweight titlist was presented with a choice to make between two intriguing scenarios: either proceed in the World Boxing Super Series tournament where he would face Yuniel Dorticos (24-2, 22KOs) in the final round; or honor a World Boxing Organization (WBO)-mandated rematch with Krzysztof Glowacki, whom he stopped in controversial fashion in the WBSS semifinal round.

Ultimately came the decision to relinquish his WBO title, though without a single regret.

“We entered the World Boxing Super Series with one goal in mind, to win the whole tournament,” Briedis (26-1, 19KOs) told BoxingScene.com. “Obviously, we never once thought about backing out in the middle of the tournament. I am here to fight Yuniel Dorticos in the final, as we were committed to do from the beginning when we returned (to the WBSS).” 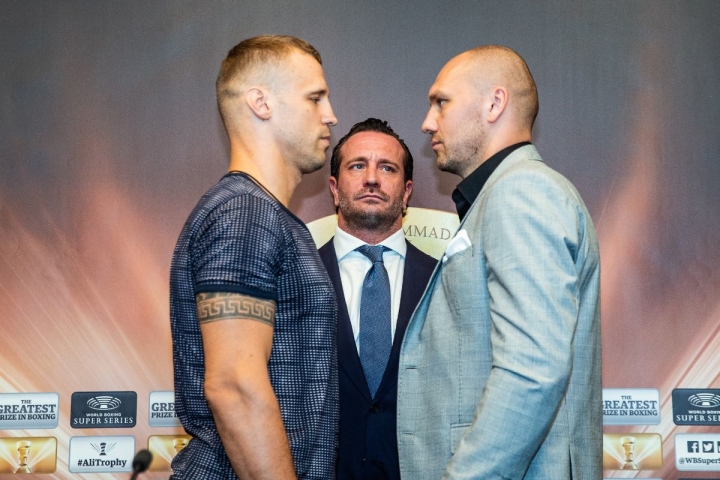 With that, Briedis now aims to become a three-time cruiserweight titlist, challenging for Dorticos’ IBF strap, as well as the vacant lineal championship and the tournament’s coveted Ali Trophy. Their bout takes place this weekend in front of a crowdless Plazamedia Broadcasting Center in Munich, Germany (Saturday, DAZN, 3:00 p.m. ET).

Briedis and Dorticos were both eliminated in the semifinal round during Season One of the WBSS, each seeing their respective title reigns and unbeaten ways comes to an end while vowing to improve on that upon returning to the world class tournament for the second season. Both advanced to the Season Two finale on the same night last June, though under vastly different circumstances in Briedis’ hometown of Riga Latvia.

Miami’s Dorticos stormed through the semifinal round with a 10th round knockout of previously unbeaten Andrew Tabiti, delivering the 2019 Knockout of the Year. Less than an hour later, Briedis advanced in a 3rd round knockout of Glowacki to claim the WBO belt in a wild shootout.

Briedis flirted with disqualification, cracking Glowacki with an elbow across the jaw shortly after being on the receiving end of a rabbit punch. The bizarre 2nd round also saw Briedis twice drop Poland’s Glowacki, the latter of the two coming well after the bell to end the round. Referee Robert Byrd miserably mishandled the sequence, which became the focal point of two separate protests filed with the WBO by Team Glowacki.

The sanctioning body ultimately ruled to uphold the official verdict but with the compromise of calling for an immediate rematch to precede the WBSS final. The alternative was for Briedis to vacate the title, which he did and will now be contested between Glowacki and London’s Lawrence Okolie later this year.

By that point, a new true cruiserweight king will be crowned. Briedis is not only confident of assuming that role but willing to defend his throne against all comers—including returning customers.

“As far as Glowacki is concerned, there is unfinished business,” admits Briedis. “I will be more than happy to resolve that after the tournament and get my belt back.

“But I am not thinking about that or him right now. All of my attention is on the final and fighting Yuniel Dorticos on Saturday night. After this fight, we can revisit a rematch with Glowacki.”

[QUOTE=landotter;20779168]This is such a great match up. I do not get why even on Boxing sites more people are not excited.[/QUOTE] Same reason people were."meh" about Gvozdyk vs Beterbiev. Just not big enough names.

This is such a great match up. I do not get why even on Boxing sites more people are not excited.