Judge Ivan Guillermo scored the contest 96-93 in favor of Ceballo, far more in line with home viewers’ observation of the bout than the wider scores of 98-91 and 99-90 from Ron Scott Stevens and Max DeLuca. 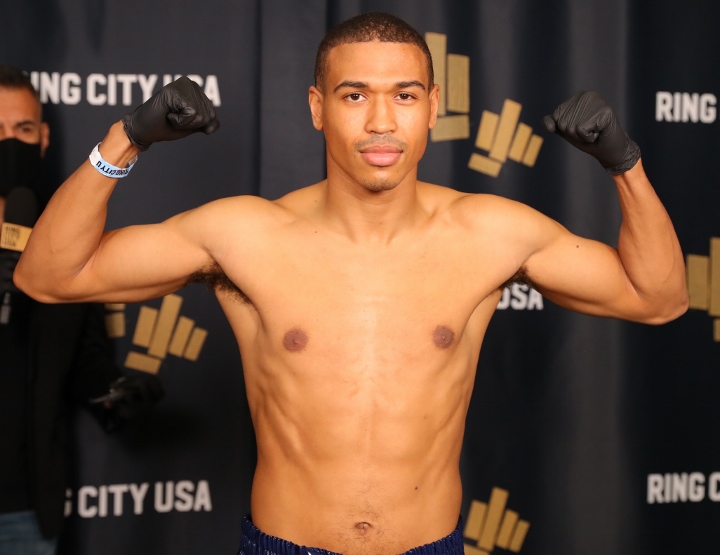 The battle of skill versus will saw the former win out early in the contest. Both boxers were fighting for the first time in 2020, though no sign of ring rust existed on either side. Ceballo fought patiently behind his jab, using head movement and establishing distance in easily avoiding Gomez’s wild overhand shots in the opening round.

Gomez closed the gap in round two, coming in with his own jab and landing a left hook. Ceballo took the shot well, firing back with a combination as he outworked the second-generation boxer from Utah.

A more aggressive pace came in round three, a tribute to Gomez finding a way to work his way inside. Ceballo continued to adapt on the fly, touching Gomez with jabs and right hands upstairs while committing far more to his body attack.

Referee Raul Caiz Jr. enjoyed a generally quiet night save for an occasional clinch, but was put to work in round five. Gomez had his gumshield ejected twice in the frame, each time after Ceballo scored on the inside.

Gomez enjoyed a better round six, even if not to the point of winning the frame. The 27-year old pressure fighter twice scored with left hook in the first half of the round, with Ceballo responding with counter shots on both occasions. Action remained at close quarters in round seven, with Ceballo exhibiting infighting skills while steadily working his jab.

The later rounds saw both fighters enjoying success at varying moments. Ceballo fought behind the far more often down the stretch, while Gomez fought with greater urgency—perhaps sensing that he was trailing on the scorecards. Time was once again called to replace Gomez’s ejected mouthpiece late in round nine, drawing a final warning from the referee.

Gomez (10-2, 8KOs) paid the price in an otherwise competitive 10th and final round, when his mouthpiece came out for a fourth time. A point was deducted from his final score, in a round where he was forcing the action even if not always landing clean. Ceballo didn’t leave anything to chance, letting his hands go down the stretch to improve to 12-0 (6KOs) as a pro.

The bout aired live as the chief support to a junior middleweight bout between Brandon Adams (21-3, 13KOs) and late replacement Sonny Duversonne (11-2-2, 8KOs).