Brian Castano Stops Wale Omotoso in Five Due To Injury

Brian Castaño is back on the title trail.

A shoulder injury suffered by Omotoso late in round five proved too unbearable to continue.

Castaño was well in control to that point, determined to send a message to the rest of the 154-pound division that he was still well in the mix. Saturday’s bout was his first since being forced to vacate his secondary title earlier this summer, with the opening round not entirely indicative of what he brings to the table as it relates to the division’s power players. 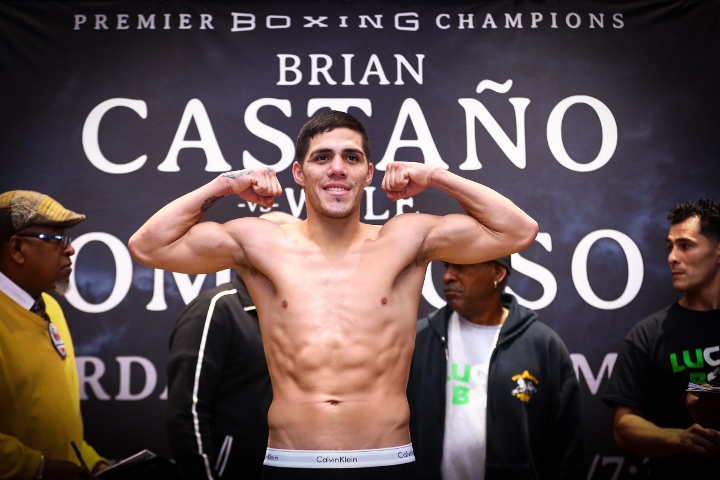 The squat contender hit his stride in round two and never looked back. Omotoso did his best to keep pace, but looked every bit the part of a former welterweight doing his best in a new weight division. The Nigeria-born ring veteran, who now trains in California, never shied away from any given exchange but was being outpunched by more than a 2-1 margin, with Castaño landing 138 punches—including 124 power shots—to just 53 for Omotoso.

Castaño repeatedly found a home for his straight right hand, aided by a jab utilized to work his way inside against the taller Omotoso—a common occurrence at this weight for the 5’7” boxer who has grown accustomed to imposing his will on his opponents.

It was a similar sequence in each passing round, as Omotoso just couldn’t find that necessary opening that would allow him to turn the tide. Instead, it was Castaño who initiated every exchange with completely disregard for the incoming as it was clear his opponent’s shots didn’t have any real effect.

Efforts to work on the inside in round five proved costly for Omotoso, who jammed his shoulder after a punch was blocked by Castaño’s arm. He immediately winced in pain and couldn’t at all disguise the discomfort as he was slow to his corner at the end of round five.

The ringside physician gave Omotoso every chance to continue, but the pain was too unbearable as it was decided that the appropriate call was to end the fight.

The official time was 3:00 of round five.

Omotoso entered on the heels of a career-resurrecting 3rd round knockout of Curtis Stevens, but has won just five of his last 10 starts overall. He falls to 28-5 (22KOs), having left the ring unable to speak to media due to priority needs in having his shoulder properly examined.

As for his conqueror, putting a belt around his waist remains a priority.

“I want all of the champions,” Castaño (16-0-1, 12KOs) told Fox Sports’ Jordan Plant (nee Hardy) after remaining unbeaten. “It doesn’t matter who—I just want them all.”

cuellar is done. and he looks small for LW

5-0 Castaño, omotoso.injures his shoulder and that's it. World class beatdown by Castaño.