The venue hosting the event will be the Barclays Center in Brooklyn, NY.

The fight card will kick off Premier Boxing Champions new output deal with FOX. A coin flip tomorrow at the kick off press conference will determine which fight will serve as the main event. 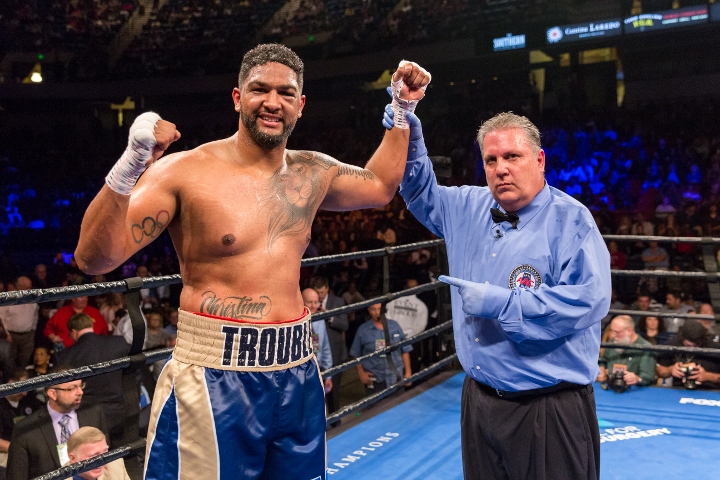 Jay Jimenez, who is best known for being the manager of heavyweight contender Luis Ortiz, has advised BoxingScene.com that his newest signee, Carlos Negron (20-1) will also appear on the televised portion of the card against former title challenger Dominic Breazeale (19-1).

Negron was a 2008 Olympian who represented his native Puerto Rico in Beijing, China.

“Carlos is very excited for this fight. He is very motivated and will put on one hell of a performance,” Jimenez told BoxingScene.com.

Negrón last fought in June, 2017 when he stopped Derric Rossy in 4 rounds. Breazeale has been out of the ring since last November when he knocked out Eric Molina in the 8th stanza.

Breazeale, who is the mandatory contender for Deontay Wilder’s WBC title, got his big break in 2016 when he suffered his only professional defeat against WBA/WBO/IBO champion Anthony Joshua. At the time Joshua only held the IBF and he stopped Breazeale in 7 rounds.

[QUOTE=Boksfan;19222386]I don't think there's any point putting money on Breazeale here, this guy he's fighting is very low level journeyman, he might (and should) stop him in 1 round. Don't think odds will be any good for a mismatch.[/QUOTE] Not…

[QUOTE=PotentialToast;19222659]Breazeale can't risk his eliminator status. Hopefully, we will see some good elimator fights in 2019 as AJ is stacked until 2020 (Whyte, Pulev / T Fury). Wilder doesn't want it.[/QUOTE] LMFAO!! I see you are another brainwashed victim of…

who the fook is dat guy? noticed he was knocked out by a guy with 18 KO losses so he should be just fine agaisnt breazy :lol1: