BEVERLY HILLS, Calif. – Dominic Breazeale is well aware that he’s on the brink of something big. If the California heavyweight gets past underdog Carlos Negron on December 22 in Brooklyn, the WBC’s mandatory challenger is in line to face the winner of the December 1 Deontay Wilder-Tyson Fury fight in his second world title challenge.

So what name did he bring up first when asked what motivates him to go the gym every day? Anthony Joshua, who stopped him in first title challenge in June 2016.

“I’m not a good loser,” said Breazeale, speaking one-on-one with BoxingScene.com. “That was a big loss. Everyone says, ‘Don’t look past anyone.’ I have Carlos Negron on December 22. And hopefully I’ll get a shot at the WBC title.

“But the ultimate goal for me is to face off again with Joshua and get my victory. I’ll sleep better at night when I retire knowing I was able to come back and beat him.” 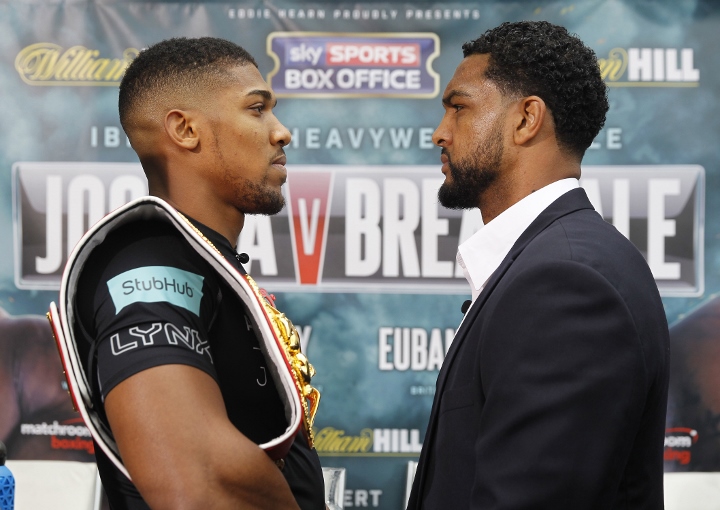 Breazeale (19-1, 17 KOs) reiterated that he’s taking Carlos Negron (20-1, 16 KOs) seriously even if few others are. The Puerto Rican, who, like Breazeale, is a former Olympian, is almost as big as the 6-foot-7 Breazeale, has lost only once and is on a seven-knockout run. That’s Breazeale’s focus.

The problem is that Negron has fought a series of nobodies, including one (Epifanio Mendoza) who stopped him and another who was 0-33 when they met. That’s why he’s seen as a stepping stone to the Wilder-Fury winner or whatever lies ahead rather than a legitimate threat, which means the fight probably won’t go the full 12 rounds.

Assuming Breazeale wins, he’ll go back to the gym and into a wait-and-see mode. He hopes to fight for the WBC title in the spring or summer of 2019 but understands that it might not happen right away.

For example, if Fury wins, Wilder almost certainly will exercise a rematch clause in the contract. And regardless of who is victorious, a massive showdown between the winner and Joshua for all the titles could supersede all else.

“I’m confident it’s going to happen,” Breazeale said. “I’m putting positive energy toward it. I’m going to take advantage of my fight on December 22 and stay busy. If (the title fight) gets pushed back three months or six months, I’ll continue to fight.

“The plan right now is to fight in the spring, hopefully for the WBC title. If not, I’ll wait my turn. We all know in the boxing game you hurry up and wait.”

In the meantime, the Joshua setback continues to swirl in Breazeale’s mind. What happened that night in London? He was outclassed and then knocked out in seven rounds, by far the worst 19-plus minutes of his athletic career.

Breazeale acknowledges the obvious, that Joshua was the better man that night. He also acknowledges that fans would give him little to no chance of reversing the result in a rematch.

That said, he thinks a great deal about where he came from and where he is going. And he believes his story has not yet been written.

Breazeale had been a quarterback at the University of Northern Colorado when he took up boxing at an ancient 23 years old, a starting age that makes it difficult to succeed long term. However, he learned quickly. After only four years in the gym, he represented the U.S. in 2012 London Olympics – where he lost in the first round – and has done well as a pro.

Joshua, who started at 18 years old, won the gold medal in London. The Briton was more advanced than Breazeale at that time and then again in 2016, when the American was overwhelmed by both the moment and his opponent.

Breazeale is 2-0 since the Joshua fight. He had to get up from a knockdown – the fourth of his pro career – to stop then-unbeaten Izuagbe Ugonoh in five entertaining rounds in February of last year before putting Eric Molina away in eight last November.

He hasn’t fought in a year, primarily because opportunities have fallen through, but he goes to the gym every day and absorbs all he can. It’s his 9-to-5 job.

And it allows him to stay in shape. He said he’s around 10, 15 pounds above his fighting weight, which is nothing for a heavyweight, but he appeared to be in fighting condition on Friday even though the Negron fight is seven weeks away.

It’s all part of Breazeale’s evolution. Tom Brown, a former matchmaker who now promotes Breazeale, chooses to focus on that rather than his fighter’s one setback.

“This isn’t a guy who’s been fighting since he was 6, 7 years old, like a lot of guys,” Brown said. “I think what he’s done is amazing. To come off the football field and make the Olympic team and then succeed as a pro without the amateur pedigree of a lot of guys is impressive. He’s learning on the job.

“The rounds against Joshua were an amazing experience for him. They make him better.”

Said Breazeale, who had 17 pro fights compared to 16 for Joshua: “You never want to pass up an opportunity like that, to fight for a world title. At the same time, was I ready for it? Maybe, maybe not. I’m not doubting myself. I was just new to the game. To travel that far, to be the ‘B’ side when I was used to being the ‘A’ side, to fight a guy who was as big and strong and fast as I was … all that was new to me. I learned a lot that night.

“I think of the night of the loss, being stopped, having the referee wave his hands across my face. That was the most depressing part of that situation. You never want to experience that. It’s why I want to get to the point where I can face off with Joshua again and win this time.”

He impressed everyone, including U.K. fans, with his courage on an otherwise miserable night against Joshua. Breazeale was battered from ring post to ring post by the end of the fight but never gave up. As his longtime trainer, Manny Robles, put it, “You can question his ability, you can question his experience, but one thing you can’t question is his heart.”

That grit, combined with lessons learned along the way, should give Breazeale a chance to beat anyone – perhaps even Joshua one day. He genuinely believes anything is possible.

“I was once told I couldn’t be fighter,” he said. “I was told a football player couldn’t become a fighter. On top of that, when they found out I was a quarterback, they said, ‘Quarterbacks are soft. You wear the pink jersey at practice. There’s no way you can fight.’

[QUOTE=Bronx2245;19286315]If he wanted him, he would've fought Ortiz for the right to fight him! Instead he went and fought the guy that ran from AJ for 12, and got dropped by that guy too! Like I said, fighting Ortiz would've…

[QUOTE=DuckAdonis;19285660]AJ battered him every second of every round... No one wants to see a rematch[/QUOTE] He's a horrible slow heavy bag on legs, which is why Eddie gave him the fight against Joshua in the first place. no one needs…

Breazele won't go past Whyte or Miller. Give Joe Joyce a few more fights and Breazele won't get past him either. Breazele may be a likeable dude, but he's barely a C-level fighter.

[QUOTE=Laligalaliga;19285936]On the contrary, whyte wants the guy that KO Ortiz. How funny life is.[/QUOTE]If he wanted him, he would've fought Ortiz for the right to fight him! Instead he went and fought the guy that ran from AJ for 12,…