Breazeale: I'm Super Upset Over Wilder's Talk of Killing Me

Heavyweight contender Dominic Breazeale is stunned with Deontay Wilder's recent statements, where the WBC heavyweight champion told reporters that he still wants to kill someone in the ring - and said Breazeale is potentially going to be that victim.

"You can ask any doctor around the world and he'll tell you the head isn't supposed to be hit. Anybody can go and in this particular time we have bad blood against each other. This is the only sport where you can kill a man and get paid for it at the same time. It's legal, so why not use my right to do so? His life is on the line for this fight and I do mean his life. I'm still trying to get me a body on my record." 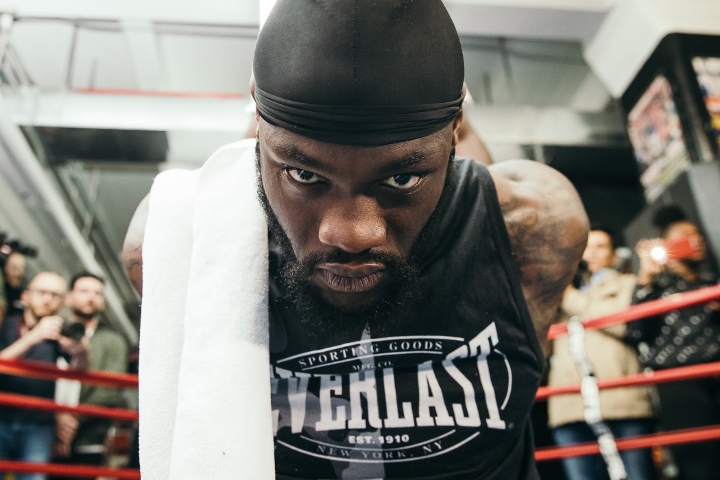 Breazeale will challenge Wilder on Saturday night at the Barclays Center in Brooklyn, New York.

The two heavyweights have had a rivalry dating back to 2017, when the two were involved in a physical confrontation in a hotel lobby in Alabama.

He believes Wilder has crossed the line with his comments of being motivated to kill an opponent.

"I'm super upset," Breazeale told CBS Sports' "State of Combat" podcast on Tuesday. "You never want to hear an individual -- and I don't care what sport it is but especially in the sport of boxing -- who has the ability to put someone else in a bad state of mind or hurt them physically [talk like that]. I don't think he understands what he's saying. He's just not all there, if that makes sense.

"Both he and I have knocked out individuals with shots where I am like, 'Oh God, I hope he is going to be OK from this.' But that's just my ring gentleman ship and having a care for life. Because of it, he is going to have to pay [on Saturday]. He was going to pay anyways and I was going to have sportsmanship behind it but now when I put this beating on him and I hurt him and punish him, I'm not going to shake this man's hand. I'm not going to tell people I feel sorry for him if he's hurt. It is what it is and he has comeuppance coming his way.

"There is no way you can get behind a heavyweight champ who wants to put harm on another individual or take another man's life or put them in a coma," Breazeale said. "That just doesn't make any sense and that's not the barbaric state of mind that any champion should be in."

[QUOTE=BWC;19748875]Lol Tyson says he wants to Kill Lennox Lewis and eat his children, bathe in Bothas blood etc., and people says hes a legend and beloved. Then they cry about Wilder. What a joke[/QUOTE] "Fans have gotten SOFT:nonono:

I think it upset him as well that you sucker punched his brother...idiot

[QUOTE=JakeTheBoxer;19747711]I don`t feel like explaining things to someone that said Ortiz would get his left nut to fight Joshua.[/QUOTE] Lololololol