"I knew the big shot was coming, it was just a matter of time," said Breazeale. "I was setting up that right hand all night. Since the third round I noticed he dropped his left hand when he took a step to the left, and that's what I got him with."

Breazeale started out slowly as Negron was able to score early with a lead left hook and an effective body attack. Breazeale stalked his opponent and threw power punches with some success before connecting on a huge right hand before the bell to end the fourth round. 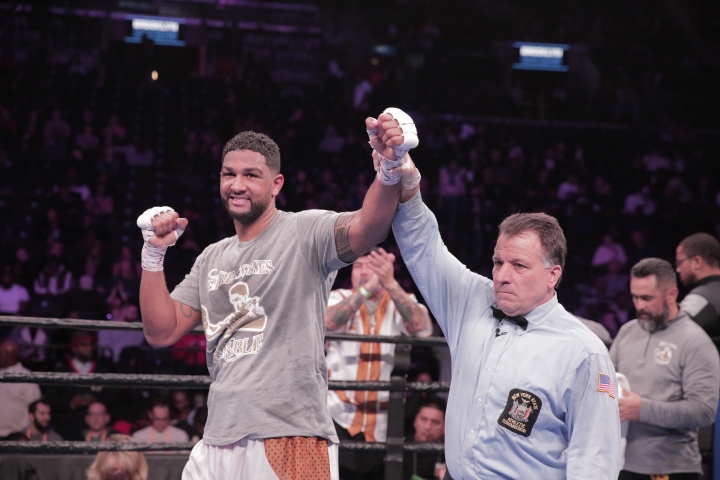 "It's been a long stretch since I've been in the ring," said Breazeale.

"I definitely worked off some ring rust, worked some great combinations and body shots, and finally got the knockout."

The 2012 U.S. Olympian Breazeale had more success through the middle rounds, controlling the action with his jab and pressure that negated Negron's offense. Midway through the ninth round, Breazeale caught Negron in the corner and connected on an overhand right that sent Negron crashing into the ropes.

Referee Arthur Mercante stopped the bout 1:37 into the ninth round. Breazeale, who is the mandatory challenger for heavyweight champion Deontay Wilder, had a message for the champion, who was seated ringside.

"I'm next in line for Deontay Wilder and I'm coming for him," said Breazeale. "I've been waiting for him and I did what I had to do tonight. I'm ready for him now.

"I know Wilder is here in the crowd. He came to watch. He knows I'm next. He better be holding on to that belt really tightly, because I'm coming. 'Trouble' is already here."

[QUOTE=landotter;19382778]Works for me. No one else wants Ortiz right now. Wilder, Fury, Joshua and Whyte all have plans. Ortiz needs an opponent, Breazeale needs to fight a real man to prove he deserves to belong. I prefer Ortiz/Miller, but if…

[QUOTE=SugarRaRobinson;19384128]U must do those Bruce Lee pushups on just two fingers, cause your fingers r the toughest I’ve seen on here in some time.[/QUOTE] But I back up everything I say punk! Do you?? I doubt that! You're just a…

[QUOTE=BigStomps;19383598]Shut up you Punk ass biitch! You wish you was on my level punk! I'd Make you my own personal biitch if we was face to face! Now stay off my nutts Punk![/QUOTE] U must do those Bruce Lee pushups…

[QUOTE=SugarRaRobinson;19383439]If you, in all your splendor (fake, tough talking, keyboard gangsta azz) is what a real man is, then God help us all ![/QUOTE] [url]https://youtu.be/EsGNL9K5mUk[/url]