Breazeale: I Want Joshua Rematch or Fight Will Haunt Me Forever

Dominic Breazeale is in perfect position to fight Deontay Wilder.

He is the mandatory challenger for Wilder’s WBC heavyweight title. Their fight also could enable Breazeale to settle a personal score with Wilder, with whom he was involved in an altercation in the lobby of a Birmingham, Alabama, hotel in February 2017.

The heavyweight title fight Breazeale really wants, though, is a rematch against Anthony Joshua. England’s Joshua (21-0, 20 KOs) stopped Breazeale in the seventh round of their June 2016 bout at O2 Arena in London. 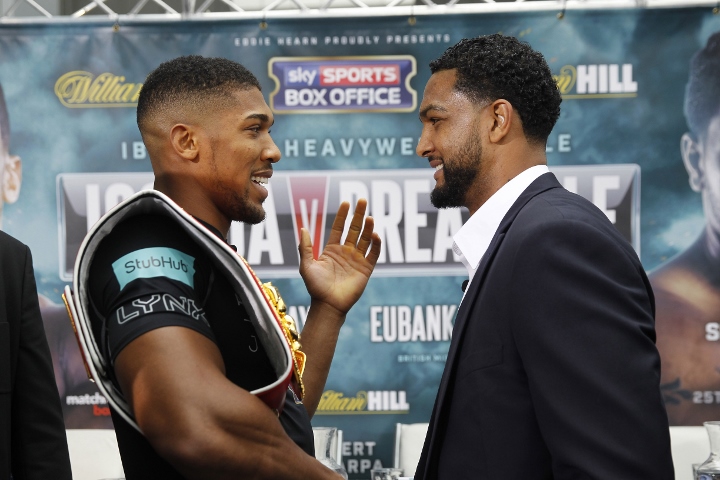 There’s no apparent need for them to fight again because Joshua beat Breazeale so convincingly. The 33-year-old Breazeale (19-1, 17 KOs) intends to generate interest in their rematch by beating Wilder (40-0, 39 KOs), assuming he gets that opportunity some time in 2019.

“The Dominic Breazeale of 2016 that fought Anthony Joshua is a completely different fighter than I am now,” Breazeale told Sky Sports for a story posted to the network’s website Tuesday. “I’ve grown two years. I’ve had some great fights under my belt since. I did take that fight against Joshua as a learning lesson and I’m learning from it every day. I did things right in that fight, I did a lot of different things wrong. But I’ve capitalized and I’m getting better as a fighter.”

The 6-feet-7, 255-pound Breazeale believes his career will be ruined if he doesn’t get the chance to avenge that loss to Joshua.

“I think that fight is one that’s going to haunt me forever,” Breazeale said. “I’m never going to be able to end my boxing career without actually getting back in the ring with Joshua.

“Hopefully after I beat guys like Jarrell Miller, guys like Dillian Whyte, even go on and win the WBC title, because I am the WBC mandatory, me and Joshua can get in the ring and square off again. That’s by far the one demon that’s going to haunt me forever.”

Breazeale realizes he is much more likely to challenge Wilder before a rematch with Joshua could become a realistic option.

“Ideally, in the right situation I would have fought for the WBC heavyweight title,” Breazeale said, “win it by the spring of 2019, and then me and Joshua [would get] in the ring, somewhere here in the United States, preferably Las Vegas. Me and Joshua can square off and banish those demons. Him with the IBF title, the WBO title, the WBA, and me with the WBC – we could make it a real, true undisputed heavyweight championship.”

[QUOTE=JWHardin;19068733]Wasn't Ortiz with Hearn at that time? That would have made it very easy to make. Ortiz is much more of a challenge than Breazeale or Molina. Maybe that is why.[/QUOTE] Part of the deal for Joshua to fight Martin…

[QUOTE=Randall Cunning;19068486]Haymon had options on Joshua's 2 defences after Charles Martin. Ortiz wasnt with PBC at the time, so they went to Breazeale and Molina[/QUOTE] Wasn't Ortiz with Hearn at that time? That would have made it very easy to…

[QUOTE=JWHardin;19068043]His tongue required 36 stitches. Maybe fake stitches? What a poor excuse! The fracture in his jaw was probably made up too. Mansour isnt good so it doesnt say much for Breazeale. The fact is Brezeale and his fans are…

[QUOTE=Sid-Knee;19067800]He bit his tongue, but it wasn't bit in half or anything. He just claimed that it was to save face. Tongue or no tongue, he was getting taken out in the next round. He had nothing left.[/QUOTE] His tongue…

[QUOTE=JWHardin;19065838]He made the excuse he bit his tongue almost in half? Please tell me you aren't that dumb.[/QUOTE] He bit his tongue, but it wasn't bit in half or anything. He just claimed that it was to save face. Tongue…