Breazeale Blasts Out Carlos Negron With One Punch in Ninth

NEW YORK – After barely missing with right hands that could’ve ended their fight, Dominic Breazeale blasted Carlos Negron with one of those thudding shots to the side of his head in the ninth round Saturday night.

That punishing punch sent Negron to his knees and eventually into the ropes, face-first. Referee Arthur Mercante Jr. quickly realized Negron shouldn’t continue and waved an end to their scheduled 10-round heavyweight fight at 1:37 of the ninth round at Barclays Center in Brooklyn.

Breazeale immediately made his way to where Deontay Wilder was seated at ringside and called out Wilder. The 33-year-old Breazeale, of Eastvale, California, is the mandatory challenger for Wilder’s WBC heavyweight title. 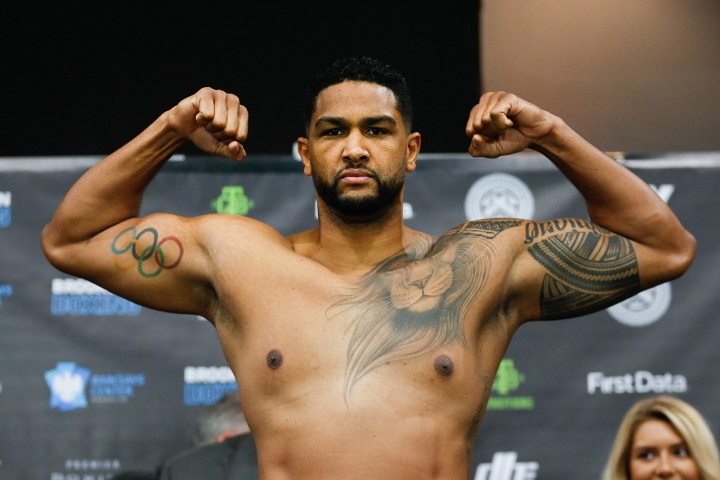 Seven years after suffering a surprising third-round technical knockout loss against Epifanio Mendoza (then 31-12-1), the 6-feet-6, 226-pound Negron at least provided a tough test for Breazeale.

In the round before their fight ended, Breazeale complained Negron hit him behind the head with just over one minute remaining in the eighth round. Mercante didn’t grant him a break, so when the action resumed, Breazeale promptly hit his opponent behind the head.

Mercante warned Breazeale, just as he had done earlier in the fight for rabbit punches.

After not doing much in the two previous rounds, Negron clipped Breazeale with a left hook about 1:10 into the seventh round. Breazeale landed a stiff jab and followed with a right hand later in the seventh.

Breazeale landed a chopping right hand to the side of Negron’s head with about 1:10 to go in the sixth round.

Breazeale connected with two overhand rights with just under 1:15 to go in the fifth round. Negron, bleeding from a cut along the bridge of his nose, didn’t have as much success offensively in the fifth as he did during previous rounds.

Negron unloaded a hard left to Breazeale’s body toward the end of the fourth round. He then went after Breazeale, but Breazeale made him pay by blasting Negron with a hard right hand that wobbled Negron just before the bell sounded to end the fourth.

Negron turned southpaw to befuddle Breazeale in the final minute of the third round.

Negron hit Breazeale twice after the bell sounded to end the third round. Breazeale retaliated by hitting Negron with a hard right hand.

Mercante finally stepped between them and issued warnings, but he didn’t deduct a point from either fighter. Breazeale and Negron also came together to acknowledge the infractions before heading back to their respective corners.

Negron hadn’t fought since he stopped Derric Rossy in the fourth round of their June 2017 bout. His hiatus was caused in part due to the damage Hurricane Maria did to his native Puerto Rico last year.

Before battling Breazeale, he spent much of 2018 serving as Luis Ortiz’s primary sparring partner in Miami.

Also on the card, 2012 United States Olympian Terrell Gausha (20-1, 9 KOs) snapped a 14 month layoff with a first round knockout of Joey Hernandez (27-4-1, 17 KOs). In his last fight, Gausha lost a twelve round unanimous decision to Erislandy Lara.

What surprised me & I think Breazeale was Negron's speed & boxing skills. Negron was a lean 229 but looked very small compared to Breazeale who had a near 30lbs weight advantage. He was landing at will 3 or 4…

[QUOTE=Pan-Africanist;19377998]Breazele will never be anything but a heavyweight title challenger.[/QUOTE] Good for him. he is clearly top 10.

Breazeale looks like he is on the slide. He just keeps getting sloppier and sloppier. It looks like he could be more than he is but it's doesn't look like he has the dedication to put in the work.

Breazeale took it out of the judges hand. Something the Charlos should've done.