Manager Cameron Dunkin has a well-earned reputation as one of the best bird-dogs in all of boxing and is known for having guided the careers of a multitude of champions, going back from Stevie Johnston, Danny Romero and more recently the likes of Kelly Pavlik, Nonito Donaire, Jessie Vargas (who faces Manny Pacquiao this weekend in Las Vegas) and Terence Crawford.

"He's from Coachella (California), ranked number one in the United States at 141 pounds, good looking kid,"said Dunkin in describing Lee, who is off Korean heritage. 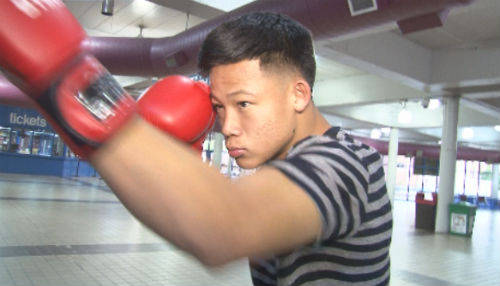 As for when he'll be making his pro debut, Dunkin told BoxingScene.com - "He's going to fight in December on a Victory (Promotions) show, I think."

The noted manager said there is still a chance that Lee will fight on the Vasyl Lomachenko-Nicholas Walters undercard on November 26th at the Cosmopolitan in Las Vegas.

So just what type of fighter is the 17-year old Lee?

"He's a boxer-puncher, but a really good puncher,"said Dunkin, in describing Lee."If you go to his amateur record all you see is: RSC, RSCH, RSC, RSCH.( Referee stops contest, referee stops contest head). It's amazing how many people he knocked out at a national level."

Interesting prospect. There aren't many fighters of Korean descent in the sport.

"Brandun Lee, amateur standout, throws away career before it even begins for 15k" -Headline fixed

Be curious what his power looks like in the pros if he's stopping so many cats in the amateurs.