Brandon Rios had to start wondering what it was going to take to get rid of Ramon Alvarez on Saturday night.

The former WBA lightweight champion finally got his answer in the ninth round. That’s when Rios bombarded Alvarez with numerous power punches that forced referee Thomas Taylor to stop their scheduled 10-round junior middleweight bout on the Jarrell Miller-Bogdan Dinu undercard at Kansas Star Arena in Mulvane, Kansas.

The official time of the stoppage was 38 seconds of the ninth round in an all-action fight during which Rios and Alvarez rarely stopped throwing punches. 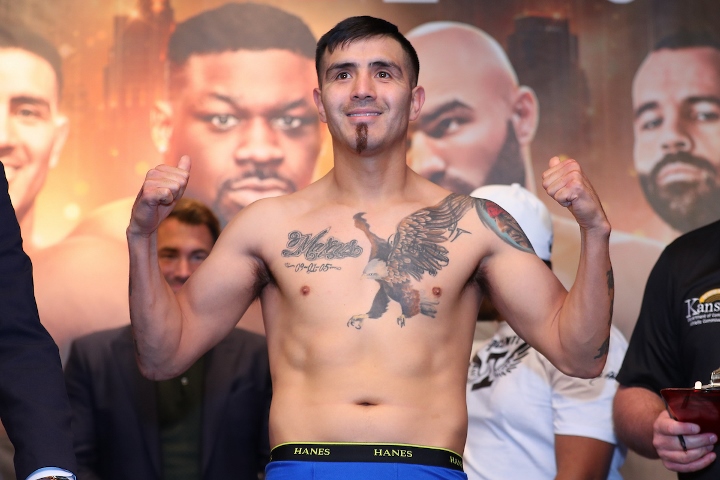 Rios (35-4-1, 26 KOs), a native of Garden City, Kansas, bounced back from his ninth-round knockout loss to former welterweight champ Danny Garcia on February 17 in Las Vegas. Mexico’s Alvarez (27-7-3, 16 KOs, 1 NC), an older brother of Canelo Alvarez, lost by technical knockout for the third time in his 10-year pro career.

Rios, 32, fought at the highest weight of his career. He weighed in Friday at 151¼ pounds for this junior middleweight bout, as did Alvarez.

The Rios-Alvarez fight was contested at a maximum catch weight of 152 pounds because Rios wanted a welterweight fight (147) and Alvarez sought a junior middleweight match (154).

Rios rocked Alvarez severely with right hand toward the end of the eighth round and pounced on his vulnerable opponent at the start of the ninth round. Alvarez couldn’t answer back and Taylor understandably stepped in to save him from taking unnecessary punishment.

Alvarez and Rios traded hard punches in the sixth, seventh and eighth rounds, until Rios rocked Alvarez with an overhand right that hurt Alvarez badly near the end of the eighth. Taylor nearly stepped in to stop the action then, but the bell sounded to end the eighth.

A left hook by Rios knocked Alvarez backward toward the end of the fifth round.

Alvarez and Rios hammered each other with power shots from close distances throughout a fantastic fourth round that was full of action.

Rios and Alvarez kept up a blistering pace at the start of the third round.

Rios landed an array of right hands and left hooks throughout the third round. Alvarez snuck in an occasional shot that kept Rios honest, but Rios clearly controlled the action in that third round.

Rios pressed Alvarez at the beginning of the second round. He hit Alvarez with various rights and lefts as Alvarez, mostly backed against the ropes, tried to fend him off.

A left hook by Alvarez knocked Rios off balance later in the second round. Rios came back to buzz Alvarez with an overhand right toward the end of the second.

They traded punches from the inside for the remainder of those opening three minutes.

[QUOTE=.!WAR MIKEY!;19280486]Bunch of Rios haters so funny,[/QUOTE] We now have irrefutable evidence to conclude that Tim F[COLOR="Black"]agl[/COLOR]ey retired to avoid a Rios rematch.

Watching the fight last night had me thinking that neither Rios or Alvarez know how to box at all and both need to retire. Both take too much punishment and both are risking their health. I heard Sugar Ray Leonard…

Rios vs Ortiz next haha

[QUOTE=PBR Streetgang;19280482]I was looking forward to this as I expected a war; [B]However I felt like Rios sounded slurred in interviews leading up to the fight and I was concerned[/B]. Alvarez is limited, not much power and no head movement…